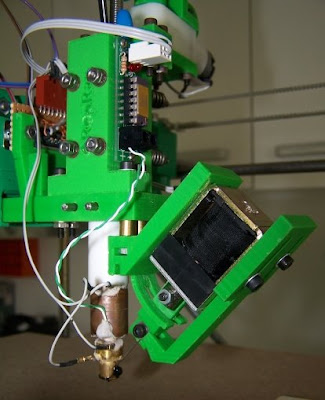 Comments:
I'd have thought that using a direct drive shaft and trying to back off the filament would have been simpler.

This looks hellishly complicated, especially the bit where the music wire goes in.

It seemed like the last music wire blocked nozzle that you made was a lot simpler. Was something wrong with that one that you did it this way?

Could you use a wire with a larger diameter and just drill across a plain nozzle? The increase in diameter being enough to cope with the inevitable misalignment to the nozzle hole.

Using a simple Vee jig with a guide hole aligned by the Vee can be pretty accurate.

Forrest: the previous one leaked, as it says. The problem is getting the crossing point in the middle of the flow.

Ian: yes, I thought that too. That'll be the next version...

Hi,guys,
I've found a way of effectively blocking the nozzle from within the extruder, with a V shape ended pin, which self-aligns to the nozzle hole, and with NO extra-holes (so, with zero oozing and with zero leaking elsewhere) - my problem now is that I need the code for controlling an extra controller (either motor or solenoid) to actuate the lever of this mechanism.
Of course, a bit of configurable look-ahead (like, "activate valve 0.3 seconds before line end, reactivate 0.2 seconds before line start") wouldn't hurt either...
I'm currently on a K2800, which works with Repetier Host, but I also installed the external/independent controller unit, which runs Marlin.
Problem is, I'm no programmer... so wouldn't know where to start for configuring such stuff...
Any help possible?
Thanks a bunch,
Eros