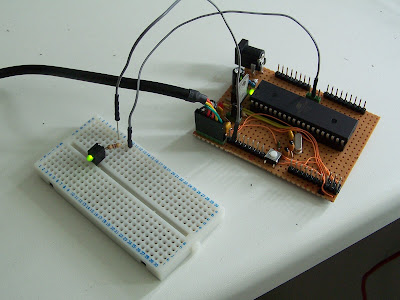 Comments:
The arduino can be used for in circuit programmer, no?

Or you don not have an arduino?

Nice... I think I'll make a stripboard version too, if I don't order from RRRF soon.

Dr. Bowyer: did you get my e-mail?

I've searched for a description of how to use an Arduino to program another. It ought to be straightforward. Anyone know a URL?

I'm afraid the crystal clock needs to be changed to a 3.6MHz one... in the post he changed some code as well. Perhaps this could be foreseen in a future Sanguino design?