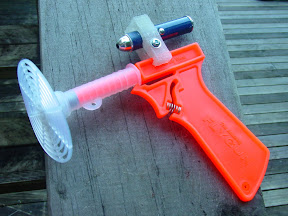 In the never-ending battle between man and fly, the flies have the edge in manoeuvrability and speed. What you need is a system that takes them down first time, every time. The Flyblaster 3000 (not TM, no patent pending) brings you that capability by combining the latest in laser technology with the most effective non-chemical anti-fly system available.

Simply use this reprapped fixture to clamp a cheap 12mm diameter laser pointer onto a spring-loaded flyswatter with an M3 bolt and watch your winged insect problems fly out of the window.

Design of a RepRappable spring-loaded flyswatter is left to the diligent student.

Full diagrams for the clamp will be available when I can edit the Items Made page :)

Comments:
Apparently DVD writers have lasers powerful enough to kill flies. Your way is more fun in the long run, though.

Mine is a darned sight easier to aim too!

My brother-in-law wanted one of these for his birthday, so I made it for him.

Vic, now you might as well RepRap sex toys if you're RepRapping weapons (of minimal destruction)... ;)

Eric, here's where the world goes an interesting shade of grey. I haven't actually made a weapon of any capability whatsoever, just a clamp to join two commercial items.

Virtually all recent model semiautomatic pistols offer a rail milled onto the frame below the slide to which laser sights or small, high intensity torches can be clamped. Mind, the lasers typically come with such a clamp in the box.

Mind, I always thought laser designators for pistols and even rifles were pretty much a mug's game. If you are up against a reasonably competent shooter by the time you identify your laser dot on him he will have put 4-5 rounds into you. Similarly, lasers on rifles have to be much more powerful. If there is any dust in the air at all you tell everybody where you are from the moment you turn it on. That's not real bright. :-s

Anyone know how we can collectively remove this spam?