More on PVA as a support

I did an experiment. Apparently glycerine is the stuff to use as a plasticiser with polyvinyl alcohol (PVA), so I weighed out four samples of Evo Stick wood glue (which, as far as I can tell, is just PVA dissolved in water), added different weights of glycerine, and let them set. They didn't, so I put them on a 60 oC hotplate to evaporate the water. 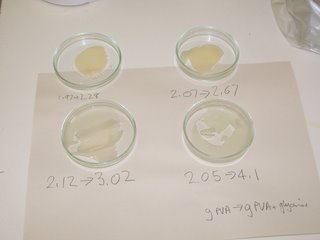 Result: it's really easy to control the mechanical properties of PVA by adding glycerine through from brittle (top left) to a pretty solid gel (bottom right). The consistency that seems about right for feeding through the Mk II Extruder is the top right one, which is about 20% by weight of glycerine to Evo Stick (a number that doesn't make much sense as it stands because of the original water, but if I add that the dry weight is 1.47g that means there's 0.6g of glycerine and 0.87 of PVA).

I have no way of telling the degree of hydrolisation of the PVA in the glue, of course. For low melting point we need that to be low. But I put a piece of my glycerined PVA on a piece of aluminium foil on a hotplate next to a similar piece of polycaprolactone. I prodded them as the hotplate warmed up. They both melted at about the same temperature, and exhibited about the same sticky consistency.

Reference: Plasticizer effect on the melting and crystallization behavior of polyvinyl alcohol by Jyongsik Jang and Dong Kweon Lee

Comments:
Excellent! Any idea how much PVA costs?

Hi Adrian, nice work. I have been thinking of some kind of bulk extruder to turn pellets or recycled containers into filament. Seems there may be lots of materials we will want to process into 3mm feedstock. From the extrusion wiki here is a pic of a basic extruder. http://en.wikipedia.org/wiki/Image:Extruder_with_sheet_die.jpg
I thought I would bring up the idea since there are so many creative people out here and see if anyone has some good implementation ideas or experience. Also, I've replied a few times but haven't been able to figure out how to post here.

PVA cost: dunno, but it's a very common industrial polymer, so it can't be a lot. We need less support than build material, too.

Bulk extruder: yes, we've though of that (there are a few blog entries way back when about using big twist drills rotating backwards inside copper pipes and the like). But Forrest discovered that companies that make plastic welding rods can turn virtually any thermoplastic into a reel of 3mm diameter filament, so we'll be using them initially. Ultimately we want to make our own, of course.

Posting: anyone can post comments, but the blog entries themselves are at the moment just for the development team. There's another blog (reprappers.blogger.com) for those building machines too.

I was looking at the numbers and understanding exactly what the ratios were and it comes out right about 40% glycerin 60% dry PVA. (OK, ok! If I have to change my login to "Captain Obvious" a simple majority vote will be enough.) I checked out the work plaasjaapie had done with extruders and it looks like he's the man with lots of practical experience there. And I love all the disciplines that this project brings together :)

Hey, Adrian and Vik are the Mk II extruder pundits. Adrian because he designed it and Vik because he's got the first one working properly in the field. I haven't got mine running yet, though I expect to this week.

I wasn't referring to the Mk II, but to your earlier endeavors related to producing 3mm filament. I had a minor dissapointment today when I realized that the milk jug containers are HDPE and require quite a bit of heat to melt. Made the kitchen stink a bit so no more plastic experiments allowed there I'm afraid. No hand molding of it and home manufacturing of filament from it will have to be done outdoors. I noticed that the HDPE got a little brown around the edges but was nice and pliable in the aluminum pie plate. I melted 3 1 gallon (~3.8 litre) containers.
I'm still thinking i could slice them up and slide them down a glue gun or melt it in molds to make some bits and pieces I'll need. :)

Bart, I can save you a bit of trouble - a glue gun won't melt HDPE.

I bought a little $30 fan oven for plastic melting. It works like a champ for HDPE, though it takes a while. If it's getting brown it sounds like you're getting impatient and running it too hot.

The big obstacle I had is shredding the recycled plastic (I used milk jugs as well). You need to grind it up small or you wind up getting a melt with enormous air bubbles in it that take forever to rise to the top of the melt and pop.

I used an old hand crank meat and meal grinder to grind. It worked but it took a long time to grind and regrind the plastic down to a grain size that was suitable.

my plastics teach was talking about bio-degradeable plastic that breaks down into protein - kinda curious on the properties... but it'd be amusing to make a working device that you can eat if we ever have a hunger problem :P `quite curious what the chem makeup of it is.
you guys have a blog we dont know about? I want constant updates :P

I recently purchased some to use as a release agent in a mold I am using for carbon fiber parts.

Most mold, marine and resin/fiberglass supply stores should carry it.