A double one for you. I've fixed the problem of twisting filament supply by just stuffing the filament into a 3l juice bottle. It self-organises inside, though there are probably more optimal configurations :) 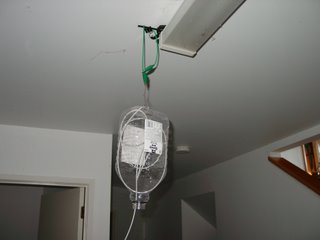 The bottle is attached with a bulldog clip and screw-in swivel. This then goes by a spare croc clip lead (what? what? Look, it was the first thing to hand...) to a clamp on the ceiling. Saves making a hole and upsetting Suz. There is a surprisingly large effect on the throughput of the extruder if you don't allow the feedstock to unkink. It becomes much slower and the output fades out.

The second thing is a belt drive gear. I put a joined strip of belt into a lid and pummelled in polymorph with a battery (flat, round, right size, to hand). This moulded one gearwheel that fits the belt perfectly. The impression of the gap had to be trimmed, re-melted, and run over with a belt a few times, but it went smootly in the end. 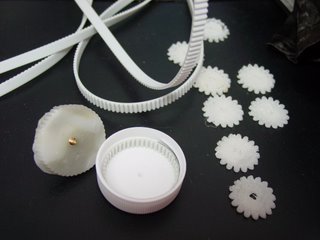 On the right side are a number of gears made at different deposition speeds and layer thicknesses.

Comments:
Neat trick with the belt! :-)

Brilliant Vik, I think we'll be needing that for Darwin...

Probably. Raise that to cross-brace a bit and you could dangle the container from it. How would that affect the structural integrity?