Sorry for the delay, our broadband cable had a run in with a hedge cutter. Here's the first cut at Darwin. A nod to Simon as it's come out pretty close to his RepStrap! I've tried to export it as VRML but Solid Edge won't export it for some reaon (might be an academic licence thing) - if there's any backdoors to sharing this virtually I'm all ears. Hopefully there'll be some shots of it in the real world soon... 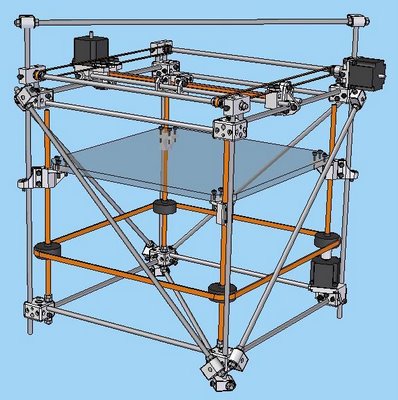 Very interesting. Reminds me of a cross between Meccano and Tinker Toy.

Most of the structure is off-the-shelf parts. The custom parts are all small and none of them seem to require a high degree of precision. The same part design seems to have been used multiple time. There's, what, seven distinct designs and about the same number for off-the-shelf items? Makes for a pretty short parts list.

And it looks like the whole thing, when disassembled, would ship in a fairly small box.

I'm slightly concerned with the proximity of that top cross-brace to the extruder heads. If the filament is delivered from above, you'll need a bit more of a gap to ensure the filament doesn't bash into the bar, pulling out excess which will then get coiled into the mechanisms...

Hi I was wondering were can i find a copy of the universal PCB traces? I have ordered the PIC micros from micro chip and am wanting to fabricate the board in my PCB lab at school when i have nothing to do. thanks

The Universal PCB is at

if you want to get it with a browser. Slightly neater would be to use subversion, which will make your life easier when it comes to updates. For that see

for those without much clue.. you have a parts list in stl? step by step direction for dummys - who have access to a prototype class for a semester