And out of the bubbling ferric chloride bath comes... 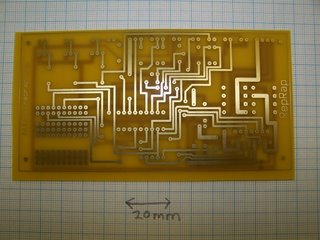 I'm working on that - a single PCB that can be populated to make either the RepRap stepper controller or the extruder controller. Here's what it looks like in Kicad: 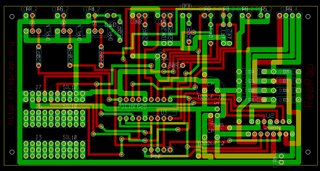 This would make constructing these a lot easier - there would only be one component instead of two, and much less soldering and opportunity to make mistakes.

Now to drill the holes, solder wires in the vias, and add chips...

If it works, it'll go on the wiki as part of the RepRap 1.0 "Darwin" design, which will be the first release.

Comments:
So did you set up the board with KiCad?

Wow, I am smitten with joy! Good idea, and such a -clean- etch. If I ever have the time to solder again, it will move my molten goobers to a higher plane.

Looks like I got my new press drill just in time :)

As I've mentioned before in these pages, Kicad's PCB autorouter is pants (unlike Eagle's, which is first-rate), but Kicad's manual layout aids are a joy to use - they give you just the right amount of information and constraint to allow the human in the loop to work creatively.

Sometime a tutorial on how to run that rascal would be greatly appreciated. :-)

Is there a kicad build lurking in the SVN repository?