As per our discussions I began breaking up the 3 kg of CAPA filament for shipment this morning. Earlier, Vik had said in correspondence that...

The new filament rotates a lot more in the extruder than the old
filament. A lot more.

I left a rather large model going and went to have a shower. I came back
to find filament wrapped around the support pole I use like bindweed,
and the extruder was gamely trying to suck in support rod and all. I
knew this would end in tears...

Vik's words came back to me in both bold face and italics when I began making the new coils of the filament for shipment. The filament has a strong memory of the roll it was put into. Left to its own devices it does its best to return to that shape regardless of what you are trying to achieve. In that it behaves a lot like military entanglement wire made of spring steel and a bit like certain garden hoses I have known. For a few moments before I was able to leverage the natural coiling of the filament I had mental images of my body being found on the floor of my flat a week hence in a big, slightly pink coccoon of the CAPA filament.

As well, the inclusions that Vik and Simon reported are definitely NOT restricted to the ends of the filament consignment but a regular feature every few feet in the filament. The inclusions are of two types. The first are friable black flecks that apparently adhered to the filament after it left the extruder before it cooled. The second are embedded inclusions that obviously got mixed in with our polymer when it was dumped into the extruder hopper. I'd suspect that either the extruder wasn't fully clean when they did our run OR that they burned a bit of the CAPA getting the settings right and that the burned flakes got included in the subsequently extruded filament. 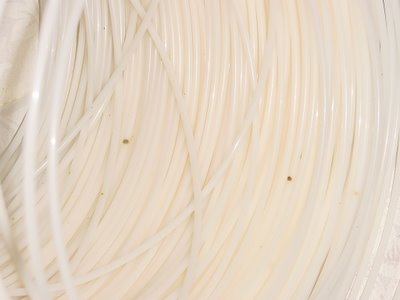 I took a photo of the inclusions which I intend to send to Image Plastics as a starting point for a discussion on these matters. This is something that certainly wants addressing before we place a larger order with them.

I did notice that as I was unrolling the filament from the inside of the coil, which was the first filament extruded the number of inclusions in the filament declined. I did the two 2 lb rolls first and Simon's 1 lb roll last. Simon's looked much cleaner than the previous rolls. This may mean that the extruder had some junk in it which cleared as more filament was produced. I noticed this happening in the screw extruder that I built many months ago.

Comments:
***The new filament rotates a lot more in the extruder than the old
filament***

Is this due to the rotation of the screw drive that's pushing the filament?

***The filament has a strong memory of the roll it was put into.***

Does warming the filament 'change' that memory?

What about passing the filament ('straight from the roll') through a 'warm' tube (copper tube heated enough to 'soften' the filament, but not melt it), and then straightening it out above the extruder, so it goes straight in.

Depending on how it all acts, and with enough tubeing to shape it, you might be able to also compensate for the filament rotation by letting it transfer that motion into a controlled 'twist' in the filament, while still maintaining a size within tolerances...

I'm not convinced that we have a problem that warrents a solution yet. We worried about the inclusions in the filament. It appears that while not aesthetic, they are just discoloured plastic and flow out of our 0.5 mm extruder just fine.

I think the twisting is more due to the rotation induced by the screw thread inside the extruder. My hand-rolled stuff rotates too, but that's definitely not made off the coil. Also, when I dismantle the extruder I can see the roughened, engaged area of the filament go around in a spiral.

When the next batch arrives I'll take a half millmetre off the depth of the trench so it can get a good grip, and we'll see how the rotation problem is then.

I've looked closely at the crap embedded in the filament. It's rusted ferrous metal. Rusted by the time it reached me, that is.

Either it picked up some stray metal turnings as contamination, or their extrusion machine is disintegrating!