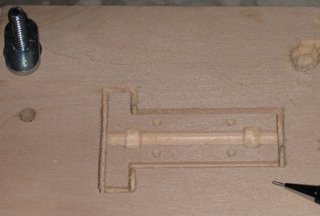 I hope this part doesn't look too unfamiliar. It's part of the extruder head, and here I've milling it out of wood using a CNC-converted Taig mill (aka my lazyman's off-the-shelf repstrap).

I'll write up more of it once I'm further along, but for highlights, I opened the .stl file in meshcam, a windows-based CAM program, and generated the g-code (the toolpaths). (Meshcam works ok under wine on linux, if you open the meshcam program using its entry in k-medu->wine->meshcam. (K-menu is the little menu in the corner of the screen.)) Meshcam doesn't work when you open it with wine via the terminal. It was extremely tedious figuring this out; I'm hoping I'll be able to use Neil Gershenfeld's cam.py to do the .stl-> g-code next time.

I'm using emc on a cheap used 500MHz linux box with a parallel port to
to do the CNC control. This involves opening the g-code file in emc and hitting "run". emc then parses the g-code and sends the right commands/5V pulses to the stepper controller circuits.

The stepper control circuits are just three breadboards hooked up to my computer via a parallel port cable. I'm using a variation on the L297/L298 reference circuits, basically this: http://www.pminmo.com/l297-8/l297-8.htm

A taig mill is probably overkill for this application (milling plastic and use as a repstrap). I bought mine for USD1K+ from Nick Carter, but viewers at home could do quite well with a sherline, proxxon, or unimat, I imagine. Note that these machines don't have the horsepower of a taig; they're smaller and lighter, but fine for milling plastic and aluminum. There's a long list of suitable already cnc-converted mills here:
http://www.desktopcnc.com/hard_pg.htm
and the cheap route is to get a sub-usd$500 chinese mill/drill
There's a good manual on these machines here: on littlemachineshop.com, and people working on these and similar projects here:
http://www.cnczone.com/forums/forumdisplay.php?f=164
Be warned that the build quality on the chinese mill/drills is highly variable, although reportedly is improving. If you buy one, buy it local, so that you can return it if yours happens to be broken/too much of a fixer-uper.

I'll write up a bit more once I've made more extruder parts out of UHMW plastic, and wiki-fy all this as well.

Comments:
Cool! It would be interesting to cast a bar of CAPA from resin, mill it out as a Mk II and see what problems we might encounter from using the Mk II design made from a much different plastic than what the Stratasys uses.

We're going to have to address that problem very soon with Darwin. With your rig we could find out right now.

I've had trouble milling CAPA but will play around with it further: feeds, speeds, coolant, freezing the block, immersing it in water while machining it, using a sharper cutting bit, etc.

If we have to, we can take Stratasys-printed ABS or milled UHMW extruder parts, make molds of the individual components, and then cast them in CAPA.

I'd like to try machining PLA as well. I'll see if I can scrounge a sample.

Yeah, I've tried drilling it and a few other things as well. It looks like a real bother, not unlike nylon except that the low melting point tends to gum cutting tools.

What sorts of things have you noticed with CAPA?

I've noticed it tends to gum up and form a hard nodule on the shaft of my ballhead endmill.

Wen I was milling in the bulk of it, it started to form a puddle around the bit, rather than being flung off as chips. I think icewater may be in order, along with bigger steppers to move my table around more quickly.

How about freeze mist? You know, that coldness in a can? Humm, that's expensive though... Just trying to think of things that don't involve corrosion enhancing fluids.

Personally, I'd first try using compressed air. A concentrated jet has a lot of cooling ability because it is also expanding (I think).

If you have a compressed air supply and need cooling you can try a vortex tube: (http://en.wikipedia.org/wiki/Vortex_tube or http://www.visi.com/~darus/hilsch/)
no moving parts but capable of dropping room temp compressed air 45 degrees C. Of course it blows hot out the other end for drying operations. One of those majic toys that's good to have around the house.

Over one million rpm within the vortex!!! What kind of compressed air flow rate is needed?

I also like Plass's suggestion of doing a CAPA one to see what trouble we'll get into down the line.

The critical part of the part is the front face. If you could do a male cut of that you could probably push CAPA round it by hand then roughly mould the back to the right rectangular shape. Stick 4 x 3mm nails in the wood in the right places and you've got the screw holes too.

Or I could do one in the Strat. One experiment we haven't done is to see if CAPA sticks to ABS (if it does that would be quite useful in itself - virtually nothing else does). But for this, a bit of veg. oil would probably be enough to ensure separation.