Wow, look what we can model: 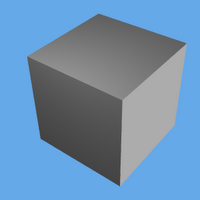 In a small diversion from updating the comms code I wrote a plugin for AoI that does a kind of 3D tesselation or decomposition of arbitrary shaped objects, removing much of the internals of the object. It is removed in such a way that it can be fabricated additively without any support material, just by allowing for a small amount of overhang between layers. Experiments conducted earlier by Ed and Adrian suggest a 45° overhang is achievable (hence the 45° slope in the RepRap logo).

Although the end result in this case is just a cube, a cut-away view reveals the internal structure: 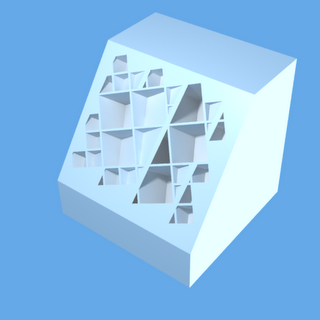 The code can be extended to arbitrary tesselation shapes, and I've implemented cubic and tetrahedral decomposition to date. The tetrahedral one really still needs some work because as I now realise, you can't completely decompose an object into tetrahedra. There are also some square dipyramids in there too, which mess things up a little bit.

The advantage of the tetrahedral approach over the cubic is that it is a geometrically stronger shape (the cubes should naturally deform more easily, which might be useful in some situations). Also, with tetrahedra the maximum overhang angle is 30° which should be easier to achieve too.

The parameters allow for the adjustment of the minimum and maximum feature size and also the wall thickness. If chosen appropriately, the walls may end up being just a couple of straight lines from the extruder with no infill required. It will significantly speed up the process of making objects, as well as requiring less material and making lighter parts.

This is something you can really only imagine doing with an additive fabrication approach like that used in RepRap, and is potentially very powerful.

The general approach is just to fill the object with the chosen filler "crystals", starting with as large a size as possible (up to the specified maximum) and then filling around it with ever decreasing sizes, down to the minimum size specified:

There are other possible approaches that may also work well, such as a tree like structure that branches ever smaller until it reaches the extremities.

Now THAT looks SUPER useful! When can I get a copy?

This looks very useful to me !

It really makes RepRap better. As Simon said: lighter, faster, material saving or much more stable with the same material consumption. This aproach could be one step towards bionic parts. This decomposition should definitely developed further.

It definitely solves the problem of how to minimize materials use if you are designing a reprap that can make things much bigger than itself. That's a question that has been on my mind for decades.

One question - how would you deal with the support material? You'd either need a way of making the slanted surfaces without any support, or a way of emptying the material out of each compartment before sealing it.

From previous reports, Adrian and Vik have been able to make 45 degree angle overhangs completely without support material. I think what Simon has done is shown us how to make large, bulky forms using that ability without having to make them even nearly solid polymer.

This is a MAJOR breakthrough in the efforts to make RepRap more cost-effective.

There is a standard way to decompose a cuboid into 6 tetrahedra, incidentally (or 5 if you don't care if the faces match up when you pass from one cuboid across its face to the next):

Chop the cuboid by slicing straight from a diagonal across a face to give two triangular prisms.

Chop each prism in three by drawing a diagonal plane to turn one corner into a tetrahedron, then another plane in the bit that's left to chop off another corner.

Pain in the brain. Alternatively look at the slide about 3/4 of the way through this:


from the Virginia CS Dept.

If you extended the treatment a bit and did multiple passesto break up those solid chunks of polymer near the surface you could wind up with a honeycomb-like internal structure that was finer and finer resolution as it approached the outer surface of the object.

This is so much nicer than merely punching holes in things. :-)

That's very impressive, Simon. I've got to put that in the presentation for LCA.

plaas: yes, that's the idea. If you specify 1mm as the smallest crystal size, it will become like fine honeycomb towards the outside. It recursively breaks down smaller and smaller as it goes until all the space is filled or the minimum size limit is reached. So it already does that, but the image is a bit complicated to look at, and it takes AoI a hellishly long time to manipulate the resulting objects.

***it takes AoI a hellishly long time to manipulate the resulting objects.***

ROTFLMAO! Why am I not surprised?

I really do want a copy of that script when you have it tamed down a little bit. I've got a dual Xenon workstation, so I'm not completely intimidated by the hellishly long time issue. Even if it does it will be well worth the trouble.

BTW, is it only working for cubes or for any bounded solid?

I also think this is very interesting. Finer decomposition towards the surface is very promising, and so is embeding assorted strengthening structures inside volumes. Like if you had a hole through the cube, (for a pivot say) or wanted it to be stronger on one face than on the others.

The idea of progressively finer resolution towards the surface makes it sound like some kind of fractal approach might be what we should be thinking of.