So I finished building my Repstrap. See http://repstrap.blogspot.com/ for ungainly pictures. I'm quite pleased that I managed to make it entirely from some copper tubing, an old PC and some old roller skates. A few nuts, bolts and electronics parts too of course, but all in all pretty simple.

It is using the L298N driver electronics as well now, which works much better than the others and also provides a lot more torque (and therefore also higher speeds). Which reminds me -- I must wiki that.

Everything works very nicely. I have run some test objects through it and everything is behaving as it should. My only problem is that the MkII extruder is really not extruding very quickly at all so the results are pretty hopeless. The first test extrusion was okay: 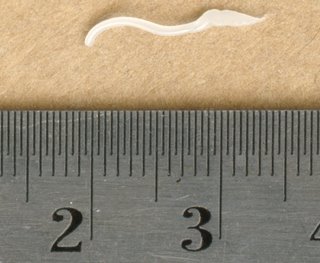 After it gets moving it has a good 0.60mm output which is exactly what I was aiming for on this first nozzle. However it settles into a pattern of not really extruding much of anything at all. I'm guessing the M3 studding that pulls the filament downwards is stripping the filament after a while and losing its grip.

Has anybody else experienced the same problem? Is it just because I'm driving the extruder motor too quickly? If I drive it a lot slower, does it still extrude okay (sufficient pressure, etc.)? Can I even drive it slowly enough without stalling it? How fast does the MkII really extrude when its working properly (0.6mm dia)?

You may want to replace that 6v gearmotor on the Mk II with a 12v GM3 from Solarbotics. You also may want to run it in pseudostepper mode for very short bursts rather than continuously using PWM. You use the full 12v for those bursts so you get full torque rather than downgraded via PWM. Mind, using the 12v motor helps that as well. It's a much more powerful motor than the 6v.

0.6mm is right on the edge of what is achievable. You'll need to tune tension, motor power and temperature just right.

The problem I had was running the motor slow enough. Notch it right down to barely not stalling, and get the temperature up to around 120C. Once it's reliably extruding, bring them temperature down until desired results can be achieved.

If possible, I'd recommend learning how to balance the tensioning and motor power in the MkII with a 0.8mm extrusion first.

You mention wiki-ing the stepper controller; you may want to hold off on that, as I hope to have finished the combined circuit that can either be an extruder controller or a stepper controller depending on how you populate it and a few jumper settings v. soon. Then we can do a PCB from that for everything (except the comms controller).

BTW, it's beginning to look to me like you could run pretty much a whole reprap with one 16F877A microcontroller. For Darwin 1.0 you might want to consider doing that for simplicity.

Ah, thanks Vik. I'll try a larger nozzle and see how I go.

By the way Simon, your repstrap looks REALLY nice!