I've started work on an idea for corner brackets to assemble a solid frame for Darwin. 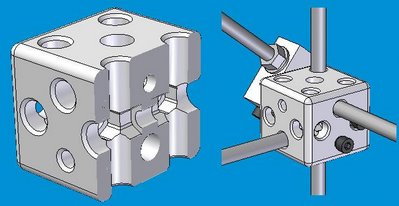 It's 45x45x40mm, symmetrical and provides 'through-hole anchorage' (i.e. the bar passes all the way through the bracket, thus rockhard clamping) for three bars and one bit of studding. Also, if the bolt configuration's right (which is a real mind-job) it also offers 2 expansion holes, 3 without the studding (I think, maybe 4).

I AoI'd it! Which is a big deal for me, as I have been hiding in my familiar Solid Edge hole for a while now, hoping no-one would notice. And it wasn't all that bad! Quite a powerful approach I thought. Though I need Vik's advice on how to do complicated sketches. I STL'd the final version and the Strat's knocking out a prototype nownow...

The design totally lends itself to Simon's magical crystallisation. How do I get that button on my screen? ;-)

Front page of the Guardian the other day you guys, nice one.

That's a really nice design, Ed. I'm left to wonder, though, what advantage there is to reprapping something like this?

It looks to me like an item that somebody with a bar of nylon or of aluminum stock and a hacksaw could knock out with a $100 drill press in a tenth the time and a third of the cost that it would take to make it on a RepRap.

Hell, I'd probably make it out of red oak, sand it off and give it a good stain. :-p

Actually, I'm trying to say something positive. That's a really good bootstrap component for a reprap.

What you can't see is the subtlety of the internal cavities that allow very versatile clamping. They would be virtually impossible to cut from solid.

It only seems easier to use a drill press because you have one and because RepRaps are not cheap and ubiquitous. Once they are, it'll seem much simpler to make it with one mouse click than to mess around with drills and things - and besides, drill presses will be much less common when everyone has a RepRap in their garage.

Would a version with square holes be practical? I'm thinking of this from two angles:

Trying to cut down on support material, and accepting circular rods of both metric and imperial diameters without any modification to the design.

I guess you could make the holes to whichever standard (American or SI) is smaller and then drill them out for the larger sizes, hey? :-)

Good point. I'll do some research on the standard bar ø's across the globe.

I'm sure if we were in the crusades era we'd just get a gang of horses together and charge around with broad swords declaring the world metric.

That was WWII and the "knights" were speaking German, if I recall. :=s

"We are the knights that go SI!"

I thought the world was officially all moving to, or already metric, but the US was not. My Ford truck is an amazing mish-mash, many parts are metric, and some bolts have SAE threads with metric heads!

Here in Canada, finding metric bar stock is not straight forward. Same with metric drill bits. Due to massive trade with the US.

A funny thing I noticed is my car has a button to switch the dashboard display from km to miles per hour. Since speed signs in Canada are only metric, and in the US they are only in miles...

Thanks for the great idea. Definitely using this for a RepStrap. I may even make some Polycaprolactone cubes by hand to speed Repstrapping.