Now I can see what's happening. After reviewing the Luleå Tekniska Universitet example and going back and working with the script that we are currently using I'm pretty sure I know what is causing the script pathology. 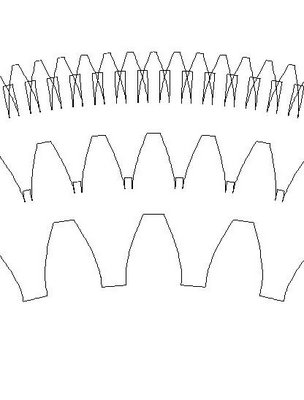 If you look at this screen grab pulled from AoI you can see pretty clearly what's happening.

The 40 toothed example works right. You can see the line that describes the bottom of the tooth which connects to a radial line that runs up to where the involute profile curve begins. That line at the bottom of the tooth should be an arc, but never mind that for now. In the script code it is called RI. The radius where the involute profile begins is called RB.

If you will look at the 75 toothed example (the next one up) you see that what has happened is that the value for RB has become less than the value for RI.

That is what is causing the pathology.

If you then look at the 200 toothed gear at the top you can see that RB has been driven down to a point where the two involute profile curves are actually overlapping. The gap between the teeth is actually higher than the crossing point.

It appears that what I need to do is make sure that the involute profile curve can never extend below the boundary defined by the radius RI.

I'll try to fix that now.

Here's the fascinating part, though. I was looking at that 200 toothed gear at a high magnification and realised that it is approximating a rack!

A rack can be considered to be nothing more than another involute profile gear with a extremely large radius and number of teeth. That may well let me use the same script for both rack and pinion!

Comments:
Yup, I'd say a rack is just another way of saying a really really big gear. Should work just fine. :)

No need to put too fine a point on it, the subtle differences will never be rendered with an extrusion head at the present level of the art.

I gave up on printing things out years ago, can never keep track of it all! ;-)