I got the Solarbotics gearmotors in today. I laid the little yellow gearmotor that Adrian sent me months ago alongside the GM3 that I bought and I can say this. 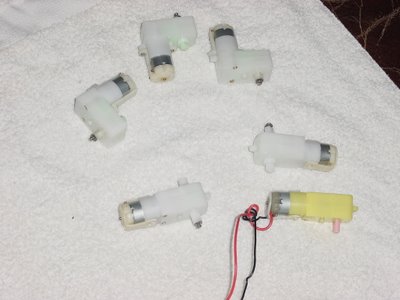 If these weren't made for the same manufacturer they were made by the same factory, somewhere in Guandong province in the Peoples' Republic, I suspect.

The mounting holes on the case are identical as is everything else right down to the distortions to the outside of the case that come as a result of reinforcing struts inside cooling in the injection molding dies.

The gear ratios are different, I suspect, because of a change in the nature of the windings. The motor cases are identical.

There is no need to change the Mk II STL file for the mounting block for the gearmotor.

I bought the GM3 with its 38 rpm peak rotational rate largely because I didn't need all that much rotational speed on the Mk II polymer pump motor and I wanted to put a shaft encoder on it. Dan at Solarbotics said that he would be more than happy to plunk the GM9 gears into the GM3 gearbox if we needed that higher rotational speed.

The mounting holes on the GM8's with its different gear box and motor orientation are in a different place. This shouldn't be a problem, though.

Ah ha! There is a difference. While to drive shaft is a double flat on the Solarbotics just like the one Adrian has it is enough bigger that it is too robust to fit in the motor coupling that he made for the Mk II.

Comments:
Looks like a new coupling might be in order. I don;t suppose yopu could draw up some dimensions?

Meanwhile, a goodly blob of hot CAPA might make for a servicabe replacement part.

I sure can. I'm also sending one to Adrian so that he can play with it with the AS5035 chips.

Good old hot blobbed CAPA. Where would we be without it. :-D