I got the perimeter line segments into inner and outer loops and consolidated line segment fragments lying on the same line (an artifact of using STL files). Now I've begun creating the inset paths for the Mk II to follow to make the outer perimeter of the object. 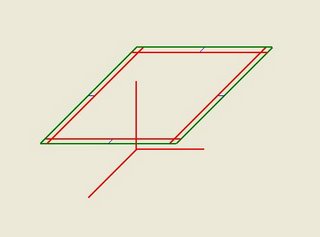 You can see the overlap of the inset perimeter lines. I have to clip off those excesses. 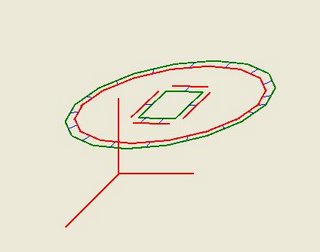 Similarly, here you can see that the perimeter of an inner loop, in this case a square hole in an elliptical cylinder don't quite reach and will have to be extended.

After that trimming and adding I will have to create yet another inset set of perimeter loops which will reflect the inside boundary of the perimeter extrusion put down by the Mk II. That will server as an outer boundary perimeter for doing the cross-hatch paths for the Mk II to fill the layer once the outer perimeter extrusion has been put down. There will be a little more trickiness with that as well, I expect.