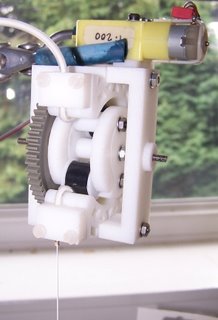 The peristaltic feeder pump for cold pastes (like Polyfilla) has a fundamental problem. Here it is working, and you can see that it produces a clean stream of paste (about 0.5 mm in diameter) at the bottom of the picture.

But the tube that forms the pump has to be flexible. This means that, when a pinch wheel goes out of contact with it, pressure is released and the back pressure from the nozzle causes the paste to rush back up the tube (which expands a little to accomodate it). So the device produces an intermittent stream - it's off half the time, and on half the time. The problem could be reduced by having more pinch wheels (my design uses two), but can never be eliminated as far as I can see. A bit of a pity, because the pump is compact and easy to make.

Back to James's driven syringe (which works...).

Comments:
What about putting a component after the pump, consisting of two plates pressed together by a spring, with the tubing between them, tuned such that when the pump is on this reservoir contains enough material to fill the empty space and still maintain pressure? Something a bit like the reservoir in a pipe organ, or the bag of a bagpipe...
One could also put a bit of a solenoid on that, to release pressure when a quick stop is desired - it would seem likely to me to produce the "sniff" type of action that has been discussed for the normal extruder.

Alternately, there's running two lines of tubing through a pump with alternating wheels for each tube, so one is at peak while the other is wanting to take up material.

Any pressure reservoir gives a problem with controlling turning off and turning on - something you need to be able to do to to extrude within precise shapes. The solenoid valve solution could fix that though - I'll look into it.

I think that the two-out-of-phase-lines solution might just generate an oscillating flow between the two.

Back to solenoid valves - an easy way to do that is to pinch a tube, of course - just like the tube the peristaltic pump uses...

The picture makes it look like the tubing you are using is the standard "aquarium air-line" thick wall type acrylic tubing. Which doesn't 'squish' very well. The easiest thing I can think of to make the peristaltic pump work is visit your local phlembologist/medical supply store or sporting-goods supplier (fishing section?) and find a length of thin-wall surgical rubber tubing (not quite slingshot making stuff) or "sinker tube".

A third pinch wheel would probably help tremendously (equilateral triangle drive) in solving the "pulse and backfeed" problem, as would having the entrance/exit points of the tubing just about the same place.

A persistaltic pump, even though they are self priming, is an 'almost' constant pressure pump only if there is some form of positive pressurization in the material entering the pump.

Put a plumber's water hammer arrestor in line with the output. That should do the job.

The tubing I'm using is actually soft silicone tube that I got from my chum John Hubble's smart gel polymer lab. It's actually intended for peristaltic pumps.

Oddly enough, "solenoid valve" isn't quite what I meant when I said "solenoid". What I meant was one of the small linear-actuator devices that work by turning an electromagnet on for one position and off for the other; set it up to work counter to the spring in the pressure reservoir, so that the spring just stops supplying pressure, and hopefully the flow stops with it. Seems more straightforward to me than a valve, really, and might give the potentially benefician "sniff" effect. Although that might also lead to problems.
Although a valve of varying sorts could also certainly work.