Peristaltic pump go after all! 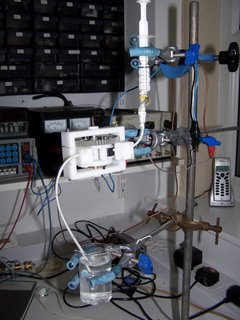 Gave up too soon (see blog right below)...

Jonored's neat idea (see the comments on that blog entry) prompted another experiment. Instead of having the extruder nozzle right after the pump, I put a length of the flexible tubing after it. That acts as a pressure reservoir, and evens out the flow beautifully. (The beaker of water is just so I can park the nozzle in it, turn everything off, and go for coffee without it clogging; on a RepRap machine it would probably be a piece of damp felt in the write head's parking place.)

Now, of course, turning the pump on and off doesn't turn the flow on and off - there is a huge time delay that would be impossible to allow for in software. But I already have a really simple solenoid valve design that works by pinching a soft tube like the one in the peristaltic pump. All I need to do is to install that just before the nozzle and use that to control the flow.

The soft tube swells perceptibly under the pressure. This, of course, gives a really simple way to switch the peristaltic pump on and off - just use the swelling to trip a microswitch. No computer needed...

I'm extruding "Fine Surface Polycell Polyfilla" which seems to have near-perfect characteristics for this (including being really cheap and being available at every DIY shop). Many thanks to my Final Year student James Low for all his work on that, which is really paying dividends. The syringe at the top of the picture is the reservoir of Polyfilla. An obvious design change is to junk this and just to run the peristaltic tube to the screw-on cap of the Polyfilla tube (which is like a giant tootpase tube).

Here is a shot of the bits of the pump. 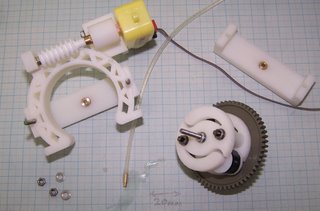 The gears are two that I happened to have lying around. But now that Vik and Forrest have sorted out how to RP gears (see here) they should be easy to replace. The nozzle is made from brass in just the same way as the bigger one on the Polymorph Extruder. Apart from those the only non-RP parts are the motor, a couple of brass bushes, and some lengths of threaded M3 bar.

It has the ability to take one or two tubes. Two tubes could be used, for example, to carry an epoxy and its catalyst. They would be mixed in the nozzle. If two different diameters of tube are used it's easy to change the volume ratio of the mix.

The nozzle could be disposable - the first thing the RepRap machine would do at the start of a build would be to make one or two new nozzles for next time...

Of course, there is still to problem of cleaning it between uses and long it takes to freeze up. :-o

Actually, when the Polyfilla isn't set, it's water-soluble. So you can clean the pump just by running water through it.

The only open surface is the tiny one at the nozzle. The rest of the paste stays wet (just as it does in its tube on the shelf of the DIY shop).

I think you've got a real winner here for infil and baseplane construction. First the Mk II and now this, whew! :-o

What are the black rollers?

***Now, of course, turning the pump on and off doesn't turn the flow on and off - there is a huge time delay that would be impossible to allow for in software.***

Back the pump up a little bit. Run it backwards for a few degrees to take the pressure off the tubing between the extruder and the pump.

That's how I plan on controlling dribble on the Mk II.

Vik, oh sharp-eyed one: the black rollers are RPed pinch wheels that don't quite pinch enough because I designed them - er - wrong. So I wrapped them in a couple of layers of insulating tape to fatten 'em up, and modified the AoI file so that next time they come out right...

Backing up the rollers will cut the pressure, but the expanding tube (which is needed to even the flow) makes the whole system so non-stiff that I still think it'll be near-impossible to control reliably that way. I'll stick with the solenoid valve plan for the moment - especially as I've got one already designed.

Of course the valve is the only thing that needs to be moved with the write head (if we end up with moving write heads)- the pump can be back with the tube of goo stationary.

***Of course the valve is the only thing that needs to be moved with the write head (if we end up with moving write heads)- the pump can be back with the tube of goo stationary.***

Yup, I was admiring that characteristic last night. Pity we can't get molten polymer to pump through a long tube like that. :-(