I went back over the filament production issue again and may have just hit upon a new wrinkle. I looked again at the ASTM standard capillary viscometer that is used to measure the melt index of polymers. 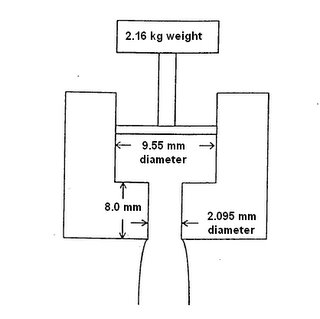 I think that I may have hit on a bit of a breakthrough in that regard by revisiting the diagram of the capillary viscometer and then getting the melt index of CAPA 6800.

At 160 degrees Celsius CAPA 6800 caprolactone's melt index is 3 grammes/10 minutes. What that means is that this device, heated to 160 degrees will extrude 18 grammes per hour or 0.4 kg/day of filament which is roughly 2.4-2.5 mm in diameter.

When you think about it that's awfully close to the size filament that we need and the daily production is within shouting distance of what a fully functional Godzilla scale RepRap could use.

Making the die a bit wider so that we could make 3 mm filament would actually make the device work faster, so that's not a problem. As well you could reduce the depth of the die channel which would also speed things up.

So what are the problems?

Lets take a look at that force for a moment. We are applying 2160 grammes (I know the units are ideosyncratic, but bear with me for a moment) of force to 71.6 mm^2 of piston area. That means that we have about 30 grammes/mm^2. Since 1 atmosphere of pressure is about 10 grammes/mm^2 we are applying about 3 atm of pressure to the top of the melt to get that highly desireable flow rate.

A pressure of 3 atmospheres in US units is about 44 psi. Being an American who has spent much of his life in SI only countries I carry a lot of conversion figures in my head. Last weekend I took Zach down to the Kragen auto parts shop and snooped around while he bought several things that he needed to repair his VW Kombi. I was quite taken with a US$199 generator set rated at 1200 watts continuous. I also looked at a similarly cheap shop compressor and noted that it operated at two pressure ranges, viz, 45 psi and 90 psi, or 3 and 6 atmospheres.

Let's look again at my little filament experiment from a few weeks back. 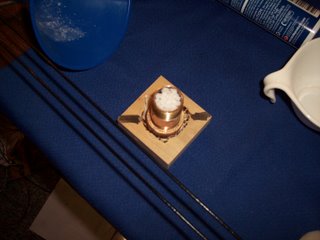 What's to stop us from screwing another brass cap on top of this assembly and tapping a very standard compressor connector to it and then hooking it up to a standard shop compressor to provide the pressure that I was applying manually with great difficulty.

The short answer is... nothing.

Once you fire up the extruder barrel enough to plug the bottom of the barrel you can apply pressure. A 200 mm length of 100 mm pipe would easily hold 1 kg of CAPA 6800 granules.

About the only objection is that a standard shop compressor is massive overkill. We require very little actual air volume, only the pressure.

With that in mind I went shopping and quickly found this... 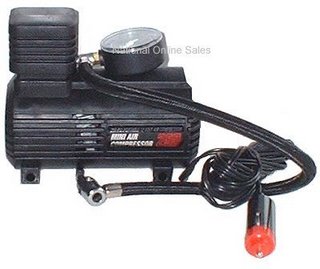 This is a tiny compressor that you plug into your car's cigarette lighter. It costs US$8.24 and very conveniently runs on 12 volt power.

It should provide more than enough air volume to do the job.

Heating the barrel is probably more than we can reasonably expect from a 12 v system, though. Happily, our friends at IMS have a solution. 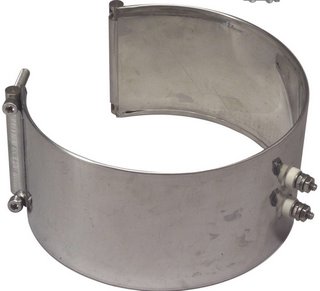 Their mica insulated band barrel heaters are widely used in the plastics extrusion industry. IMS will sell a 100 mm diameter x 100 high unit rated at 750 watts, far more than you need, to you for about US$30.

Just something to keep in mind. That, and hot CAPA at 160˚c can cause much pain and cursing. (It sticks on contact, unlike hot water which politely drips away, minimizing thermal transfer!)

In any case, you probably had thought of that, so I'm just going to wait for experimental results! :)

How rapidly will the molten CAPA settle in the cylinder? Force it out more rapidly than it settles, and you'll end up with a hole blown through and CAPA stuck to the sides of the chamber.

On a related angle, I'm producing good joins on short lengths of 3mm CAPA, so stringing lengths a metre long together is not going to be a tricky task. Even a 13cm^3 volume is going to be useful in the mid-term timescale.

Yup, I know all to well about how much energy can get stored in compressed air. I don't think that you've thought about what happens when a fluid like water heated to 160 degrees under 3 atm pressure is suddenly depressurized. I'll stay with air, thank you so very much. :-s


***How rapidly will the molten CAPA settle in the cylinder?***

From my toaster oven experiments with a 20 mm piece of brass pipe as the extruder barrel it took 30-45 minutes to settle and cook out most of the bubbles.

There is nothing to stop anybody from scaling this down to something like you describe. IMS makes all kinds of sleeve heaters. In fact, iirc, Adrian bought a couple of small ones some time ago when we were working on the auger bit extruder project. I bet that he'd send you one.

Oh, Plaasjaapie, just caught something, I think my first sentence on my first post "Okay, well that sounds like fun..." might have sounded sarcastic. It wasn't, it was literal (I'm a very literal person). Maybe that's why your reply sounded... ugh, testy! ;)

I think I'd better warn you - I used one of those exact models of compressor in my early furnace burner experiments, and I'm afraid they're worthless for continuous running. They overheat in about ten minutes and mine wore its cheap bearings into a massive ovoid in about an hour.

I bought a second one and retrofitted it with a scrap of phosphor bronze I salvaged from the department workshops, but gave up on it and eventually switched to a salvaged fridge compressor - those things are bulletproof.

The testiness wasn't about you. I was just remembering what happened one time when a pressurised hot water line broke at a joint on a project that I worked on in Sweden many years ago. It was fortunate that I wasn't standing any closer than I was.

Thanks for the warning, Tom! I really appreciate it.

If you already have pressure fittings, you may want to revisit the idea of using vacuum to degas the polymer. Just pump it down to a reasonable fraction of an atm a few times, and all the bubbles will be gone.

One more quick idea: what about a bicycle pump, a reservoir, and a pressure regulator? That way, you could just pump up the reservoir, set the regulator, and forget it.

You can buy a reservoir-based compressor that can run a nail gun that can do the job for about US$25. By the time that you buy a bicycle pump, reservoir and all of the bits you need to do what you are talking about I expect that you'll pay about the same.

Good idea about depressurising the extruder, though. That notion has a lot of merit.

Brilliant! I think you need one trivial modification - don't push on the polymer with the compressed air direct, have a floating piston that has air one side, polymer on the other.

Or better: put the polymer in a high-temperature plastic bag (one of those designed to go in a microwave oven should do), outgas it as joel says, then just put the bag in a pressure chamber with the air outside and with the nozzle clamped at the mouth of the bag.

Or how about using water instead of air? Domestic tap pressure is about 4 bar. The boiling point will rise with increased pressure, but you don't want to rely on that because a leak will explode. But you can also raise the BP by using a sugar solution.

Or use cooking oil in the heated jacket, pressurised with mains water away from the heating, and with the oil/water interface designed to move up a tube (water underneath) as the polymer extrudes. The pipe conveying the oil from the pressurisation plumbing to the extrusion chamber can be very fine indeed.

Me again. Outgas the polymer as a separate process, making a lump. Then vacuum-wrap the bag round it cold before placing it in the heating chamber.

(Me again)^2. Miniaturise the entire device, and make a heated RepRap polymer write head that has a bag-wrappeded shot of polymer in, and is fed by mains-tap-pressurised cold cooking oil. The pressuriser would be elsewhere feeding oil at 4 bar into the head. When the head runs out, just swap in another cartridge.

Exactly what constitutes a "cartridge" may require some thought. For example it might be a length of copper plumbing pipe, a heater, the polymer-in-a-bag, the oil needed to fill it, and the nozzle.

You could be refilling one while your second one is writing.

Or maybe just releasing the pressure would do...

LOL! Does this mean you like the idea, Adrian? :-D

Could the CAPA cartridge be a well formed CAPA piston with a built in preassure sealing fringe and the top end? Push it into a smooth pipe, screw on a cap with a hose attached that feeds pressurized oil/water/air, and as it melts at the bottom end and is extruded, it is pushed down?

To reload, just unscrew the top cap, put in a new CAPA cartridge/piston/seal unit and continue?

Oooorrr, what if you make several cartridges. Each is a simple pipe with a fitting a the bottom, and as a group they are heated, and outgassed, then they are used one by one (cooled, or still hot?) by clipping into the extrussion head just above a heater to melt the CAPA as a pressurized fluid pushes them out?

I see problems with all those suggestions, but...

I just -knew- this idea of Plaasjaapie's was fun! :)

Yvan Roy: That makes all kinds of sense. You could even make the CAPA piston with a mold rather than extruding it. Putting some holes in the piston would also let the charge of CAPA being extruded outgas properly, too.

I'd suggest being able to fit multiple 'cartridges' in the head at once... that way you have much more control over when you refill the thing (you could wait to pop three in the thing when it's almost empty... or you could 'top it off' between parts/stages/at your convience (rather than having to time it around when an entire single piece has fed through enough to fit a new one)