Zach suggested using a peristaltic pump for room-temperature RepRap extruders. This is nice because it should be very easy to make one using rapid prototyping. But I thought that a problem might be that the flow would be too pulsed.

Time for an experiment: 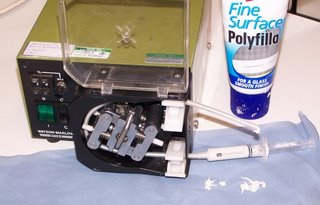 I stole an old peristaltic pump (temporarily) from colleagues in Biology & Biochemistry, filled a syringe with the same Polyfilla that James used for his experiments, and set it running. Here's a (slightly out-of-focus) close-up: 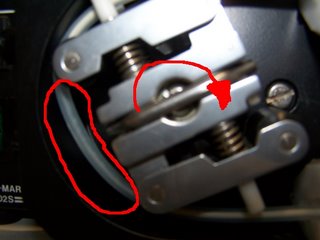 The direction of rotation was as the red arrow indicates, and you can see a void behind the roller ringed in red. The suction created caused some of the liquid in the Polyfilla to vapourise. Unsurprisingly, the stream out was very intermittent.

Then I put a pressure on the syringe (in a real design, this could easily be done with a weight): 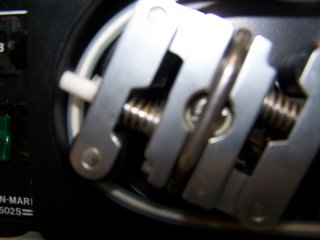 The result was a smooth flow with no interruptions. The soft tube did tend to drift round the pump in the direction of rotation, but in a real design it should be easy to anchor.

So. Off to design an RP peristaltic pump...

Comments:
A "higher" temperature peristaltic pump for moving the molten polymer is an interesting concept. It would require some melt-chamber redesign, but it might work. Viton tubing [400F/204C at the high side] would probably be your best bet for something to withstand the melt temps. I know that Smallparts.com carries it, but haven't bothered looking for it elsewhere.

Two stacked disks with spring mounted rollers offset in a ogive similar to Wankel Rotary engine but with roller wheels (use small plastic wheels from old non-optical computer mice? Springs and levers included!) instead of blades on the rotating cylinder head is the easiest way to describe the innards of a 'round' peristaltic pump.

It would be nice to use it for the high-temp stuff, but the whole pump mecanism would have to be kept at that temperature, which would make it difficult to make itself.

Eeks. I should have caught that. There would need to be a heated pump, a super-insulated pump body, a post-pump heater, or some combination. A 'hellishly hot' melt section prior to a 'cold' pump wouldn't work because the polymer would start cooling as soon as it left the melt tube, and if the pump is on stand-by for an extended time, you'd end up with solidified polymer, a burnt out pump, and an over-pressurized melt tube. Messy.

A metal pump body threaded on to the melt tube, using high-temp plastic parts [Viton tubing, HDPE, UHMW?], feeding into a metal 'outlet pipe' to the extruder head might work. The thermal mass of the extra metal might help moderate the 'yo-yo' thermal problem and allow tighter control of the melt process, and might eliminate the need for secondary heating. Steel or Aluminum?

SeaGROL, I think the peristaltic pump is intended for extruding funky stuff like Polyfilla. :) To be used as a support medium I think.

Although, I wouldn't put it past these unpredictable RepRap people to start extruding all sorts of odd things, like fancy filled chocolates and pastries. After all, I've heard them talking enthusiatically about icing suger I think...

Would be handy in the late hours of the night... ;)

Well, yes, I do see how an engineering minded chef could consider using a 'normal' peristaltic pumped MkII extruder for such things as chocolate and frosting, but once they got into the 'soft rock' or 'hard rock' stages where they'd be messing around with sugarfloss..

Severe case of devil's advocacy ahead.

One of the big downfalls of peristaltic pumps is that their inherent complexity (springs, rollers, tubing..) limits them from being easy to "bootstap" using limited tools/supplies, unless you are really good at whittling. Would something simpler like a gear pump be apropriate? Far easier to fabricate. Here's the URL to a drawing on one of my favorite 'thinking grounds':

A dirt-simple gear pump could be fabricated using some type of 'toaster oven clay' [I believe it's called 'Sculpy'?], a couple of meshing "flat" hubbed spur gears, and two pieces of plexiglass/sheet plastic to keep the gearing in alignment. You could actually use the gears to carve the necessary final (post-bake) chamber dimensions if you used steel gears.

I don't know how well a gear pump would work with a 'soft froth' medium such as Polyfilla/DAP filler, but they do work well with most liquid-like materials.

Has anyone else looked at using a water-soluble wax (www.freemanwax.com is only one manufacturer of the stuff) as a support material? The viscosity/temp range on some of them aren't pretty (Freemans: 3300cps at 120F, 800cps at 170F). Don't forget that most wax/metals companies do not have their entire product catalog on the web.

I've got a fair amount of experience with sculpey clay (I'm trying to bootstrap my reprap using it, and so far the only questionable item is the extruder itself...)

There are a number of drawbacks to using this clay... and I don't think it would work in this sort of situation...

#1) Fragile... it can crack/break/shatter quite easily... while you can 'machine' it after it has been cooked, it does not machine the best... (sandpaper? sure... cutting it with a clay knife? if you're careful... drilling holes or excavating stuff? the slightest fracture in the material will cause the whole thing to fall apart...)
#2) Precision... I'm no expert clay-craftsman, but the stuff isn't the easiest to work with to get it precise... again because you have to work with it while it's wet... and not so much when it has been cooked...
#3) Burning/heat... This stuff burns... if you leave it in the oven for too long it does begin to burn... (at 225f) I could see the insides of the gear pump getting scorched from the passing material... Not a show stopper, but it could deposit burnt material into the feed stock and it will probably eventually break down the part...
#4) Sticking to plastic/etc... This clay is PVC so I expect the feedstock material to stick to it just like it would stick to itself... again... it doesn't remelt at temperature, it burns, but it is still a PVC product...

Alternativley... run those two gears in the opposite direction with a little space between them and you've got what I was thinking of as a possible alternative to the screw drive of the mkII extruder... I noticed someone was having some trouble with the feedstock getting stuck around the screw, and I'm questioning how accurate/functional I can make the current design out of clay, so I was considering a pair (maybe two pair) of metal gears pushing the material through... (actually four gears, 2 for pushing the material through, and 2 slightly larger ones so the motor only turns one axle and the larger gears are used to turn the second axle...)

I don't see this 'sculpy' (brand name) polymer clay being of any lasting use in the system... but it does seem like a good material for bootstrapping... It's easier to work than the plastic itself (cold then cook it vs working it while it's hot) but it is brittle, heat sensative, and probably sticks quite well to the plastic...

I'm working on building my setup out of shelving hardware, basic fasteners, and clay... Once it's up and running, all the clay will get replaced with plastic (starting with the extruder head). Then I can start working on upgrading the functionality... (ie: replace the screw drive with rack and pinion, once I'm able to prototyle a few feet of rack!)

Simply a well greased plastic triangle with a 4 or 5mm ball bearing in a notch at each apex. The drive motor shaft mounted right in the center of the triangle. The triangle spun in a snug fitting disk shaped cavity, around the perimeter of which was looped a soft silicone tube that the ball bearings rolled along and compressed in turn.

Seems easy to make, and by slowing the rpm of the motor, and increasing it's torque, I suppose it could pump thicker stuff.

How do contemporary automotive washer fluid pumps work? Could something like this be bought cheap?

SeaGROL's point about the complexity of springs and things in peristaltic pumps is true. But the really neat thing about RP is that you can design all that into the plastic at no extra cost. I have a preliminary design that consists of three parts (4 off of one - the pinch roller) plus a drive motor. Those parts have very fancy geometry, but who cares? In RP complexity is free...

And yes - the Polyfilla is for support. And yes - we do want to do chocolate...