And the second string does exhibition during timeout...

I was down to two working PIC chips and didn't want to waste the weekend, so I went back to working on the cabling for Godzilla.

The biggest job was getting a Frankenmotor installed in the x-axis ensemble. I had to excavate a considerable cavity in both side supports with a chisel to get it to fit. The real pig of a job, however, was getting the motor shaft aligned with the threaded drive shaft. 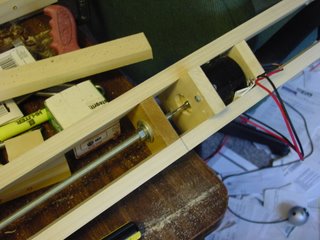 I got it done, but it took most of the morning, very fiddly stuff.

Adrian wanted to see the two y-axsis towers with the x-axis ensemble on board. Here it is. 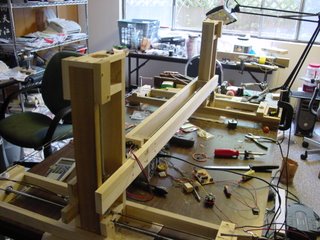 For good measure here are two short video clips of it running as an ensemble.

I was playing music this morning during the tests which sounded considerably better than the deranged chimpanzee on the jack hammer noise of the motors by themselves. That loud snapping in the first clip is me switching the toggle switch. It gives you some idea of how sensitive the camera microphone is.

If you like the music it was done by a jam session consisting of part of a musical group called Spælimenninir i Hoydølum (lit. Players/Musicians in Hoydølum) in the Faroe Islands plus Angelika Nielsen, Jakup Lützen and another very young woman violinist whose name I do not know.

I was listening to a series of their performances at some sort of folk festival at Gøta. You can find the clips at a favourite little folk music website of mine which originates out of Scandinavia.

If you go there and click on the Faroe Islands buttons you can listen to Spælimenninir. Angelika Nielsen, the big blonde violinist on the clips, also has a solo piece on the same links page. She's a dead ringer for my ex-wife (though she's maybe 15-25 years younger than my ex is now) whose family hailed from that same neck of the woods (Shetlands and Orkneys) maybe 180 years ago. It must have been a tiny little gene pool. Mind, I suspect I would still have my ex-wife if she had been that musically talented. I love that kind of music. :-D

You know, though, I wonder at times whether listening to that sort of music keeps the shadows at bay or simply beckons them closer like a warm campfire on a cold evening. :-)