Hi, so my (James Low's) final year project under the supervision of Adrian involved investigating and proposing an alternative, low-cost support structure material for the RepRap FDM process and the means of its automated deposition. So here are my findings.

Having had icing sugar proposed to me as an idea I quickly found that it was unable to be deposited at 0.5mm resolution and that it took a long time to set (over 1hour).

However, Polyfiller was the perfect substance. I was able to deposit Polycell Fine Surface Polyfiller from a 0.5mm nozzle, creating a perfectly consistent line, which set hard within 2 minutes. 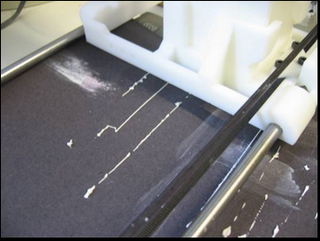 An initial problem was that Polyfiller, once set, would not fully remove from the surface of an ABS part(although it would remove from the syringe nozzle if placed in warm, soapy water within an hour or so of exposure). But Adrian's use of vegetable oil as a releasing agent on the ABS cude (Blogged in April 2005) resulted in using it (veg oil) to see if it would aid Polyfiller's removal from ABS parts, which it did perfectly. 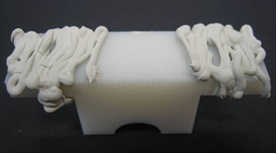 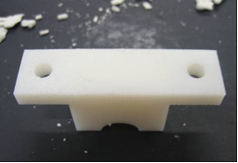 The same part after the Polyfiller had been removed.

Ignore the cracked layer (it was cracked before the layers were separated).

The pictures and information regarding the deposition mechanism for the Polyfiller will be added soon (next few hours).

Comments:
Polyfiller! Now there's a name that brings back memories. I must have used a truckload of that stuff patching the cement plaster of my old house in South Africa! :-D

Yup, looks like a good one. I'm going to have a think on how to fix that to an overhead rail for fixed-head designs.

Just a thought, James - does mixing sugar or corn syrup in the Polyfiller make it easier to remove? It works with cement.

Vik, I havent tried that one yet. Is something I will have to look at later in the week then. I did run some vegetable oil through the syringe and nozzle before using the Polyfiller, which meant it didn't stick so much though.

I forsee a potential problem - how would you remove the polyfiller from a concave cavity in a component? Even if it wasn't stuck to the surfaces, it would be trapped by the geometry. Is there any way of dissolving it without also damaging the component?

Firstly, the syringe designed to deposit the Polyfiller has no concave cavities, and all the components are easily removed and cleaned, so that is not an issue. However the Polyfiller removal is also very simple. Components can be placed into warm, soapy water and the Polyfiler will remove (though not dissolve). A cap can be placed over the nozzle to create an airtight chamber for the Polyfiller, enabling it to be left without drying out, then you only need to remove the Polyfiller for general cleaning.

I think Tom meant from a cavity in the part it is making. The way we'll solve that, I think, is to lay the stuff down in an open pattern so that it supports, but has air gaps and crumbles easily.