My son came home for the holiday so I had his digital camera to record a bit of what I've been talking about. I'd have had the old Sony digital camera that I usually use except that my sister and former partner in my consultancy went off horse shopping to Wyoming and took it with her. :-( 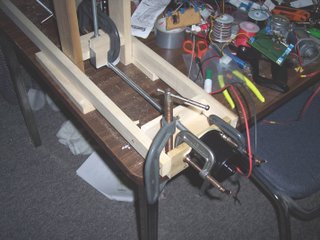 As you can see the Frankenmotor sets into the Z-axis mounting bulkhead with no problems whatsoever. 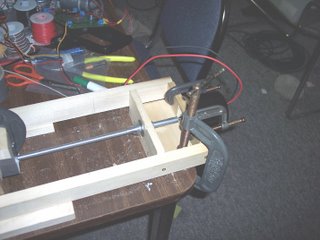 In the second pic you can see my duct tape coupling connecting the motor to the threaded drive rod. Interestingly, I've been running the y-axis tower back and forth for two days now and the coupling is just as good as when I wrapped the joint.

Here is a link to a Quicktime movie of the z-axis doing its 38 mm/sec act.

Comments:
I looked up Godzilla in the archives, you've built a big machine! Is this the "standard" size you guys are aiming for for all repraps?

I've got a trick for connecting motors to assorted shafts which might be of use to someone...

I use various sizes of silicone/rubber or neoprene hoses. I match a hose that can just barely be shoved onto the two shafts. I remove it, then sqeeze it into a bigger hose, like tough automotive fuel injector hose with embeded fibers. I then force this doubled up sectin of hose onto both the motor and shaft to be driven.

Additionally, a metal or tough plastic pipe can be used as an outer shell. This stiffens the joint. If this ridgid outer sleeve is split lenth wise, two or four hose clamps (with their fasteners offset to neutralize vibration) could be added to really hold things in place, but I haven't had to go that far.

These joints are long lasting (especially if good hose is used) and have a small amount of flex which is critical for things built with less than ideal accuracy. ;)

I looked up Godzilla in the archives, you've built a big machine! Is this the "standard" size you guys are aiming for for all repraps?

No, not at all. Godzilla is the biggest conventional RepRap. Brett is building what may well be a bigger one using a Stewart Platform paradigm, though. :-)

I use various sizes of silicone/rubber or neoprene hoses.

I know about that one. It does indeed work very well. If you go into the archives again and look at the work I did on a filament extruder powered by an electric screwdriver you will see that that is exactly the approach I used.

I used duct tape with this one for two reasons...

2) the motor shaft was too small for the neoprene hose that I had at hand. As it turned out the joint did not have to be as strong as using neoprene hose would have made it.

I will probably use neoprene hose when I stop experimenting and regularise the design.

Thanks for the pointer all the same. I wish you'd been looking at our website back in the first quarter of this year. It took me a long time to stumble on the neoprene hose approach by trial and many errors. -)

How did the horse buying go?

She found a little roan gelding that she likes and did a lot of mountain riding, which is what you mostly do here on him. Negotiations will be starting between the rancher and my sister before too long, I suppose. At a guess she'll wind up paying about $7,000 for him inclusive of the shipping.

I'm annoyed with her, though. She's already bought Buck, a big, big quarterhorse 4 year-old from the same ranch back in January. Buck is a wonderful guy but she bought him sight unseen and he turned out to be 16 hands tall instead of 15 and proved to be too big for my 1.65 metre tall sister with her bad lower back could climb on to without a small boulder or fallen tree to give her a start getting up to the stirrup, something you don't want to depend on when you do 100% trail riding on the ridges out in Carmel Valley where she rides.

My annoyance, I think, stems mostly from the fact that Buck is the first horse I've really liked since I had to have my old evil, cross-grained Appaloosa, Odie, put down six years ago after he went completely moon-blind about six years ago. It's rare that you see a horse like Buck around here. Mostly what you see is brainless Arab trash and the like that are about as interesting as riding a motorcycle. I'd have bought him off of her except that she abruptly decided to retire completely out of our consultancy a few months ago to position herself to finance, I think, her current frenzy of horse shopping. I'm still not where I want to be vis a vis liquidity after that so that I can't afford to think about getting, feeding and most especially keeping a vet in the life style to which he is accustomed by owning a new horse for another year or so.

She settled on US$6,500. They're getting a vet check and xrays now to see if the rather small hooves on the roan are indicative of congenital problems which could lead to lameness later on. BTW, the roan is another quarter horse, just smaller. Quarter horses typically possess, as I'm sure you know, hindquarters fabricated by the Caterpillar tractor company, which is exactly what you need on mountain trails unless you want to walk 'em yourself and lead your horse instead of ride. :-S