I started out with a description of an exercise to use a 3D CAD package to create an involute profile gear. It appeared as if all the formulae were there, so I thought I might be able to just plug them into an upgraded version of Vik's cog script and be done with it. I updated the input window in the involute gear script and that looks pretty good. When I looked at just poking the formulae into the script things slowed down a little bit.

Well, the formulae seem to be there. A clear description of what to expect in terms of reasonable ranges of some of the parameters... wasn't. So... I spent a while bring confused and milling around till I found values that looked a lot like what the graphics were showing. Most of it had to do with the fact that the engineers had expressed angles in the equations in degrees instead of radians and I didn't notice. :-S

That entailed my generating a little VB.NET programme to let me look at what was coming out of the formulae and see what they looked like drawn. No big deal, except that the creators of VB.NET, unlike the people who created earlier versions of VB, seem to think that graphics and trigonometry are something that happen to other people, not VB programmers. As a result, I spent some time digging out trig functions and graphics commands that had been buried in mountains of obfuscating bullshit. We seem to have well and truly entered a dark age where working with computers is being deliberately made obscure to justify a priesthood who does the magic for everyone else. This is about the third dark age I've seen in my rather long programming career. They're so annoying. :-/ 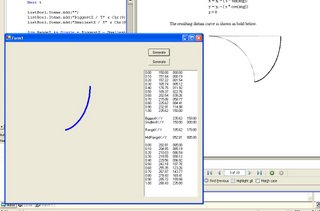 After a while I began to generate a curve segment that looked a bit like what was shown on the references.

So far, so good. Time for some sleep.

Comments:
Was this the Pro/Engineer tutorial on involutes? I've used that one before...
To a certain degree, this shows me the limitations of a program like AOI. It's great for a free program, but lacks the intuitive design capabilitiy that would enable an idea like RepRap to really reach the masses.

Maybe google will buy a parametric CAD company like PTC and make it free (they did it with SketchUp, only it's not parametric)...