Busy weeked with little to show

I had a pretty busy weekend. I managed to:
* Progress the virtual comms and testing infrastructure (see svn branch), which will soon allow me to complete the remainder of the comms infrastructure. This will eliminate those occasional pesky errors.
* Updated my old graycode wheel perl script and put it into the reprap subversion repository. See reprap/misc/graycode in subversion.
* Using new graycode script, produced a template for a bi-directional position sensor for a DC motor controller.
* Tried out my previously imaginery process for turning PC artwork into plastic objects, pre-reprap. Potentially a useful process for "repstrapping" with kitchen level technology.
* Some work on reprap application to eliminate most of the hard coded magic values and make them customisable via the preferences screen.
* Tested my old thermoplastic bushing idea for my old repstrap design. Mixed success. It fits so perfectly that it doesn't turn very easily, but it certainly removes any play in the threaded rod. Needs more work... 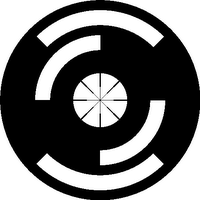 This is what my 2-bit graycode bi-directional position sensor currently looks like. It's so simple it could just as easily have been created by hand, but using the script allows for very simple changes to diameter, spacings, etc. In fact, these are the parameters for the graycode script. It's fairly versatile:
* Number of bits (arbitrary number)
* Wheel dimension (mm)
* Inner dimension (mm)
* Strut size (mm)
* Span (degrees). For angle sensors, it's often useful to use less than the full 360 degrees.
* Stagger (~mm). Stagger between sensor positions. This allows bulkier sensors to be used and the graycode rings are offset. The application also produces a cutting/placement guide that should where the sensors should be placed, which is pretty essential when staggering.
* Resolution (dpi)
* Portion. Fraction of wheel to include (entire wheel is not necessary if used for angle measurement and using less than 360 degree span)
* Reps. The number of repeats of the graycode pattern around the wheel. This is the new feature needed to make a mechanically balanced wheel for a fast turning position encoder.

I started to add STL support a while back, but that's not even close to complete. The primary output is a bitmap ready for printing on a laser printer.

My conceptual process to turn these into actual plastic objects was:
1. Print out object onto tracing paper with a good laser printer (new toner). Inkjets don't work as the inks are UV transparent.
2. Take a piece of thin steel, and spray it with PCB photo-resist. Bake dry for impatient people like me.
3. Place tracing paper pattern on metal. Cover with thing sheet of transparent plastic (not glass which is UV opaque) to hold pattern close to surface. I used the plastic from a CD cover, whatever that is.
4. Blast with UV light
5. Use developer to bring out the pattern on the metal
6. Using electrolysis, "melt" away the unprotected part of the pattern, leaving a thin metal version of the pattern. Alternatively use copper sheet, and use ferric chloride to remove unwanted metal.
7. Press metal pattern into molding plasticine. Pressing it deeper makes a wider part.
8. Create plaster of paris mold from plasticine and let it dry.
9. Melt plastic into mold

My goal was to produce one of the gray code sensor wheels and Forrest's sample involute gear pattern.

I tested steps 1-5 but it seems my photo-resist is a bit too old now. In fact it's quite a few years beyond it's "best by" date, so it's time to order some more. The patterns were not holding well enough for me to carry out the remainder of the steps. I will try again when I get some more photo resist, but all the local suppliers seem to have stopped selling it. I'll try RS.

I tested step 6 using several different electrolytes. Plain salt (NaCl) was the fastest but has the downside that it produces some chlorine gas, so ventilation is a good idea. It doesn't need much salt though. I hand painted a pattern onto a piece of metal, and the pattern was cut out with good fidelity. It takes quite a few hours to cut, so you have to have some patience. It makes the more conventional ferric chloride approach more appealing if I find or make some plain copper sheet. I have lots of ferric chrloride, so I might try that next time. The electrolysis approach produces nice steel templates and just seemed cooler :)

I have previously tested steps 7 to 9 using PLA to produce some gears. It works quite nicely but destroys the plaster mold so it can only be used once. It also takes a bit of scraping to get excess plaster off the gear before it will work nicely.

So all steps tested, but not quite working yet.

Comments:
I see now there is a huge simplification that can be used here that I think only applies to 2-bit encoders. You can obviously just use a 1-bit chopper wheel and two sensors, and it achieves the exact same thing. That will make the wheel simpler and better balanced.

LOL! That IS quite a surprise! Cool! :-D

This is what jewelers and printmakers do; they call it "Edinburgh Etch", adding citric acid from a health food store to the ferric chloride (less hazardous, cheaper). They will transfer a drawing to a photocopy or laser printer transparency, and then use a domestic iron to fuse the toner onto the metal plate. (Or print it onto a Press-N-Peel (PnP) sheet.)

Other tips I've heard: applying a low voltage to the copper sheet, which speeds up the process and reduces the ammount of undercutting (metal loss at the edge of the mask).

Instead of casting the plasticine in plaster, why not cast it in urethane rubber? Say, Polytek urethane 74-30. You'll get just as much detail and can reuse the mold a couple hundred times.

Ask me for more details if you like, or check the
Polytek catalog. It's a dead simple block mold.
http://www.polytek.com/catalog/catalog.pdf
There are little tricks, like greasing the board and piece, that help. (Not greasing board = permanent uerathane board ornament). I can write up a quick how-to if you're interested.

Your local art/sculpture supply stores might have the stuff, or a different brand 2-part uerathane casting medium. If you get some, also get a can of "Mold Release" (spray wax) or pam, and some vaseline for the board. You can build up a form around the gear with plasticine. Do it outside/wear gloves/don't eat it; the catalyst for the rubber contains mercury, which offgasses from the liquid, but not from the solid.

I find it amusing that we're using our printers to make these things.

Those are some handy concoctions. I will test some of those out this week. I'm going to stick with photo-resist for now because a new can has arrived and I doubt I can easily get the PnP-Blue paper or anything like it here.