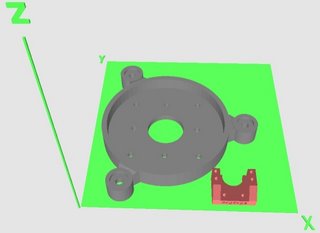 Thanks to Daniel Selman's Java3d book I have got a program working that will load STL files and allow one to zoom, pan and rotate them on the screen. It has a stylised view of the working volume of the RepRap machine (green), into which one can load objects to be made (Vik's spider - grey; and my extruder motor holder - pink). The working volume is represented by an STL file too, so we can make it look like anything we like (and animate bits of it if we really need to). The parts for manufacture are all grey at the start; the pink is just me testing if my code to pick them with the mouse works.

I now need to write the code that allows one to move the picked object about on the green square of the build-base to position it where you want it made, and to do collision detection to make sure objects don't touch.

I also have polygon infill working for laying down CAPA by the extrude head. One would outline a part slice with polymer extrudate, then offset that shape inwards by the width of the extrudate and hatch fill it like this (this is not one of the parts above): 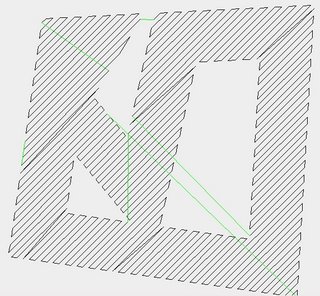 The black lines are fill; the green ones are jumps. The slightly odd diagonal lines between adjacent passes will go when I have the next stage working (they are caused by the algorithm's absolute refusal to put material where there should be air, even if it's within the tolarance of a surface).

I need to get set-regularization working for the polygons (lots of coincident surfaces get unioned when an object has vertical sides), then put the 3D stuff and the polygons together...

I'm goign to have to hack some bulk plastic out of that spider design though!

Glad you guys like it - now I just have to make it do something useful...

Any chance of comitting it to CVS?