I got past a consulting deadline yesterday so after a good night's sleep I decided to kick back for a few hours and see if I could put together the "big board" stepper controller that I'd been thinking about. It's designed around a bus that runs across the centre of the board with the controller and comms connections in the upper right quadrant and the SN754410's in the other three quadrants. 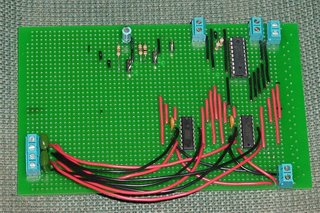 So far I've installed two of the Sn754410's to drive one of the NEMA 17's. I plan to debug the design before trying to install the other two.

Comments:
So, is the concept to have the 3 axis logically separated, but all three controllers assembled on the same board, to avoid any issues of loose connections between them?

No, it's still one axis per board.
I'm avoiding, however, soldering SN754410's together, something that Simon's design demands, though.