So this is what he looks like in the flesh! 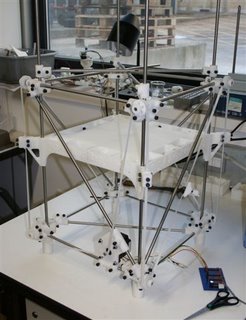 It's very satisfying to point out that everything white is RP. But annoying to note that he doesn't quite work yet. He'll go down beautifully. But not up. But that was the very first impatient test without bothering to align the bearings properly, so I'm keeping my well and truely fingers crossed for next week.

Comments:
VERY nice minimalist concept, Ed. Your central platform is bolted together from four identical modules, too, isn't it?

It wouldn't take much of a tweak to your design to make it scaleable as well. Great stuff! :-D

//It wouldn't take much of a tweak to your design to make it scaleable as well.//

Take that to its logical conclusion and you'd end up with some sort of bizarre Meccano / Lego hybrid.

Hopefully we'll converge on something nice and modular.

If you take scalability to its logical conclusion, you'll have something like Richard Feynman's vision of nanotechnology: Repraps that just keep getting smaller each generation.