We appear to have another successful filament extruder concept... 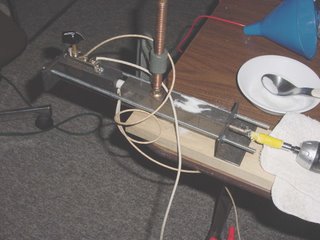 I decided to do the first run hot so that I could avoid problems with jamming. I set the thermostat on the heated barrel to 150 Celsius and let the system heat up for fifteen minutes keeping track of the temperature. When it hit 150 I began priming the polymer pump. Within 5 minutes molten polymer began to be extruded. I caught the output on a ceramic plate. The filament was too hot, as I expected and although it emerged with a diameter of approximately 3 mm gravity quickly stretched it thin. 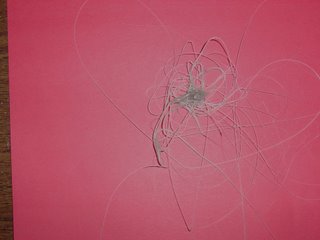 The product landing on the plate had no coherence in diameter.

Because I was working alone and was standing in for a thrust bearing for the test rig and spooning polymer into the feed chamber as the experiment was underway I was unable to photograph the extrusion as it took place. 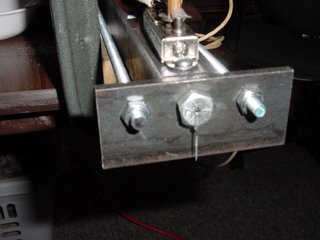 Here is a photo of the extrusion tip after I shut the system down. You can see a thread of filament remaining on the cool tip.

The first few feet of filament was dirty with grit and grease from the machining of the barrels. That soon cleared, however, and the last filament extruded was clear. CAPA turns translucent when it cools. It feels rather rubbery and is quite strong even in thin cross sections.

In the next days I will endeavour to configure the rig so that I can operate it with hands off. I will also have to figure out a way to connect the electric screwdriver to the extruder with something a little less informal than duct tape. :-)

Interestingly, the electric screwdriver provided more than enough torque to operate the system. There was no jamming of the system for any reason. As well, I was able to manually resist the axial thrust against the screw pump. Apparently, the larger diameter extrusion orfice means that the operating pressure in the heated extruder barrel is considerably less than I expected. That is wonderful! :-D

I think as well that it would be good to slightly incline the extruder so that the filament doesn't try to hang onto the extruder tip. Having a water tray directly under it would also be a good idea. Godet stations and a takeup reel system are something that somebody might want to think about reprapping before too long.

I will also do a series of test runs at lower temperatures to find a more optimal operating regimen. I'd like to find a less informal gear motor to integrate into the system. I don't get the impression that the plastic gear motor that we use on the Mk II is going to be up to the job. I think that we will need just a little more torque than that motor can deliver. On the other hand, I get the impression that this system will produce filament at quite a good clip.

It would appear that the only reason for going to a larger diameter auger would be to be able to handle polymer in larger granules.

Using the masonry bit appears to have made all the difference at the last.

I would like to thank everybody on the team for their advice and observations. Thanks goes to Dr. Bowyer who also ran with the concept using several different assumptions and whose example prodded me to work a lot harder than I would have on my own.

Finally, especial thanks go to Vik and Brett, whose timely last minute suggestions and encouragement yesterday got me past the jamming problems that I encountered. I was very discouraged at that point. I don't think I would have attempted to run the auger through the thermal barrier and into the extruder barrel had Brett and Vik not suggested it.

Thanks guys. This has been and continues to be a LOT of fun.
# posted by Forrest Higgs @ 4:58 AM

Good one, Forrest. A 3mm extrusion system is going to be a terriffc asset to this project. Not sure if I can replace the PTFE with concrete this time :)

When cooling the extrusion I would definitely recommend ice in the water. It makes a significant difference to the hardening rate of the soft CAPA.