Tests on the 6.35 mm filament extruder

After reviewing Vik and Brett's comments, I decided to see if I could pump polymer through a PTFE barrel with an auger bit. It turns out that contrary to what I'd read, viz, that the wall's friction coefficient had to be higher than the auger's isn't so. CAPA pumped through a drilled length of PTFE with no trouble at all. That means that the whole pump and thermal break assembly could be made out of a single piece of PTFE.

There are two practical problems with doing that, though. First, PTFE is expensive at US$0.15/cm^3 (US$2.50/in^3). That wouldn't be so bad if I weren't worried that you'd be replacing it regularly because of wear between the auger and the barrel walls.

Vik makes another, more intriguing suggestion though. What if we applied a water jacket to the pumping section. My mind immediately went back to the old water cooled Browning heavy machine guns my grandfather used in WWI. I seem to remember that they worked by allowing the water to boil off. That would create a liming problem, but those are relatively easy to sort out.

Hmmm.... Adrian! How is that prototype of yours going?

Hit the hardware store again and had to choose between two German bits. One was half again longer than I needed and was made of some mad alloy of titanium and vanadium. I figured that I'd never be able to cut the carbide tip off of it, never mind mill the shank end down a bit to accomodate a thrust bushing.

I settled for a more modest German masonry bit that will require that I shorten the thermal barrier just a touch so that the tip end of it will extend into the melt chamber. I sawed off the end of that one and tested it with the pump barrel housing and thermal barrier and it happily pumps CAPA and even pumps it in the PTFE barrel. I suspect that it would have pushed the polymer completely out of the extra 25 mm of PTFE barrel beyond the end of the bit and out of the existing PTFE thermal barrier except that I was having to resist the thrust of the drill bit manually.

While I was at the hardware stockist I got the bits of power cord and taps necessary to seat the thermostat on the extruder barrel and get the melt going. I also bought a vise so that I can try drilling extruder tips here rather than having to trek out to my sister and brother-in-laws every time I need to put something in a vise.

Managed to get a true hole through a PTFE cylinder on the second try. Double checking the polymer pump test when the batteries on the electric screwdriver ran down. 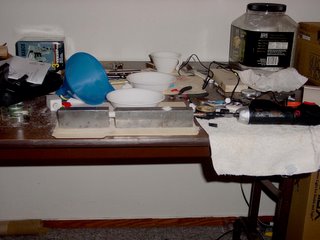 Time to make some breakfast. :-P

Repeated polymer pump test with recharged batteries. Interestingly, this time the pump filled the entire heated extruder barrel, 89 mm long and .89 cm^3 volume, before jamming. The additional flights provided by the masonry bit apparently makes for a more efficient pump for the amount of torque that we have. Will be drilling an extruder tip and wiring the heater barrel after breakfast. Hope to run a full test this morning.

Thermostat and power cables rigged correctly. No fires, electrocutions or explosions so far. Have my fire extinguisher on hand just in case. :-o

Presently running tests to get a rough idea where the thermostat setpoints are. This takes time because of the thermal mass of the heater block. Taking temperature readings in the extruder mouths with the IR non-contact thermometer. The mass of the steel will predominate with this system so I don't have to run it loaded with polymer since the heater barrel weighs a couple of pounds and a full charge of polymer in the barrel less than a gram. :-) 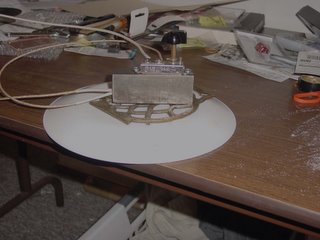 Temperature in the barrel is at about 60 Celsius just now and the thermostat setting is at 12:00.

Thermostat setting of 09:00 stabilises at 94 Celsius. Shifted thermostat to 11:00. The indicator knob on that bad boy gets HOT!

Thermostat setting of 11:00 stabilises at 116 Celsius. It looks like the thermostat is pretty linear, which is what I'd hoped for. Now, I wonder what the deadband looks like.

Adrian got a bit of extrusion going at 120 Celsius, but Solvay took their melt flow index at 160, so I'd better check to see what higher settings on the thermostat gets me. The data sheets that Jeff's people in the UK so kindly sent along with the powder samples indicates that CAPA decomposes at 200 Celsius. Fortunately, there are no halogens or nitrogen in the formula for CAPA so if I screw up and burn some it's unlikely to kill me immediately.

Oh well, now to get some food and drill a extruder tip. :-)

Thermostat setting of 15:00 stabilises at 132 Celsius. I'm going to crank the thermostat up to max, about 17:00 and see what happens.

Looks like I'm going to have to develop a graph for the thermostat performance. That certainly isn't linear. I also need to go back and check 15:00 again.

Thermostat setting of 15:00 (max setting) stabilises at 137 Celsius. Looks like last time I caught it at the bottom of the dead band. Ok, fair enough. :-)

Comments:
seems to me like it it may be a bit overcomplicated.

why not just use one long metal tube, run the auger all the way to the end (as other posters suggested previously, and heat the end where you want it to melt.

if you use the right wattage of a heater, wont it just heat up the right amount at the tip, and gradually get cooler as you go down?

***why not just use one long metal tube, run the auger all the way to the end (as other posters suggested previously, and heat the end where you want it to melt.***

That works in screw extruders where the heating is done by mechanical compression of the polymer rather than by applying the heat from another source. Those extruders operate with internal pressures of about 600 atm.

Adrian and Vik's Mk II design uses thermal energy to do the melting of the polymer and much lower pressures of about 40 atm., conditions that are much easier to create in small systems like we are trying to design.

Adrian is trying to make a filament extruder work in exactly the way you describe and has achieved some good initial results, though it's not certain yet whether that approach will be practical. I am using the approach taken with the older Mk II approach which thermally isolates the pump from the heated barrel.

That's the strength of open source technology teams. We can develop things a LOT faster than a private development lab at a fraction of the cost. :-D

In principle, you could sculpt some heatsinks and radiators to control the heat profile along the tube - but it might be rather sensitive to ambient temperature and such.

Insulating the barrel and just heating the melt chamber at the end is a lot less variables to control for.