Hey! I'm not claiming to have "invented" any of this, okay? I've been through the archives and I see that Adrian and Vik, I think, did all this on a smaller scale a long, long time ago. Indeed, I originally set out to make a Gingery piston extruder which uses the same principle.

Anyhow, here goes. I had to drill out the extruder barrel to get the marble dust/CAPA mix clear of it this morning. It was quite a mess to say the least. This afternoon I thought about running that mix through the polymer pump again and sort of wilted at the thought. I thought about those push filament through with your hand experiments in the archive. I took the cleaned extruder barrel, insulated it with two scraps of poplar wood, filled it up with the marble dust/CAPA mix and kicked on the cartridge heater. In 2-3 minutes the IR thermometer said that it was nearing 100 degrees Celsius, so I inserted a .25-inch rod into the barrel and gave the charge a tentative push. I estimated that I applied about 10 lbs of thrust which put the cartridge barrel at about 14-15 atm. I emptied the barrel in about 5-10 seconds of steady pushing.

I got a 300 mm long filament out of that which was a uniform 3.175 mm in diameter. Because of the lower temperature and possibly the filler the filament was self-supporting. I caught the filament in a cup of cold water. Here it is. The colour is nasty because I didn't finish the drillout with an alcohol swabbing. 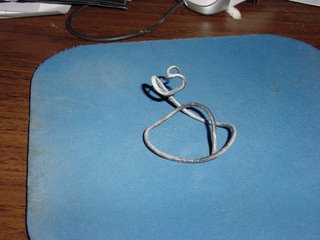 The filament was straight coming out but got bent and twisted in the small cup of water.

If this mix produced a usuable filament in the Mk II it would bring the cost of extrusions down from US$12.73/kg to US$8.52/kg. I suspect that if we bought marble dust in 20 kg sacks like we will the CAPA that our mix price would drop to somewhere in the vicinity of US$7.73/kg.

The quality of the filament and the ease and speed of it's manufacture has got me to thinking about the notion of a reciprocating piston extruder again. Brett brought up something like that in a discussion we had some weeks ago. Hmmm...

Comments:
I know a little about piston-based extruders, as I worked for a concrete pump company called AFD many, many years ago. I think they've gone under now, but here's basically the thing we used to make:

But it looks like the extrusion you're doing manually is shaping up very well.

Have you thought about using aluminum silicate powder instead? It's even cheaper than marble powder, easier to manufacture and more chemically stable (no reaction with acids, a big problem with CaCO2) I've got about a million and a half tons of the stuff in my front yard (AlSiO2 is also called "clay" )

Kaolin is probably the form of clay we'd use and your points are well-taken about price and reactivity.

I know that calcium carbonate used as a filler tends to make the mix easier to extrude. I'm not sure what the effect of using kaolin would be. The reference I found about it talked only about improvements of processability.