This morning I ran the extruder exercise again under better conditions

The extrusion exercise lasted 00:10:59. For the first 4-5 minutes I would estimate that over 75% of the extrusion took place. After that the electric screwdriver slowed down dramatically as the batteries discharged. There was not a linear dropoff in rotational speed. Effectively there were two rotational regimens, viz, full speed and very slow with a transition period of less than a minute. I tried to hand turn the auger when this happened and did not observe any meaningful increase in resistance to turning. The battery pack also heated up to the point where it was hot when a hand was applied to the body of the screwdriver.

After 00:11:59 the electric screwdriver stopped altogether. There was still no untoward resistance to hand rotation of the auger. The batteries discharged state seemed to explain the stoppage, not a change in conditions inside the extruder. This was not obvious in earlier tests of much shorter duration.

Initially in the exercise as the polymer pump filled the extruder barrel there was a quite substantial reverse thrust that tried to push the auger out of the pump. I couldn't estimate the amount of force required to keep the auger in the pump but can only say that it was substantial in that I had to work hard to return the auger to its proper position. After the extrusion started I no longer had to apply any force force to the auger through the electric screwdriver to keep it where it belonged. This situation lasted perhaps half a minute.

A few observations about the filament in the quenching bath. The filament...

Most importantly, however, the filament stayed transparent at 50 degrees when I removed it and placed it on a teflon coated cookie sheet. It immediately turned transluscent on contact with the cookie sheet. Clearly, the setting of the temperature of the quenching bath needs more thought and experimentation.

I teased the filament around the boundaries of the pyrex quenching bath with a bamboo stick and kept it in once piece even after I removed it from the bath. The semimolten state of the filament caused it to stretch in a few places when I handled it during the transfer, however.

This exercise yielded roughly 680 mm of filament exhibiting a diameter of 2.9-3.15 mm. Approximately 4.9 cm^3 of polymer was extruded during the 00:10:59 of the exercise That is enough to supply a Mk II for approximately 01:45:00 of operation. Interestingly, there was a very slight discolouration of the filament for the first very few mm of extrusion after which the filament exhibited the waxy white colour of the CAPA 6800 granules.

One interesting observation was that the extrusion contained air bubbles at times when it left the extruder tip. These expanded and popped with a quiet little crackling noise The molten state of the filament at this point healed any distortion in the filament that these bubbles caused leaving a very nice, solid filament. 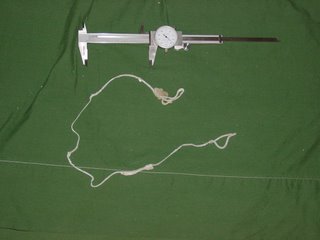 I am postponing further filament experimentation until the new gear motor arrives.

Some hours later I broke the extruder down and cleaned it. I encountered the usual polymer melt that extended through the PTFE thermal barrier and 23 mm into the polymer pump barrel. The photograph of the polymer melt clearly shows the transition from fully melted polymer to barely consolidated polymer powder. 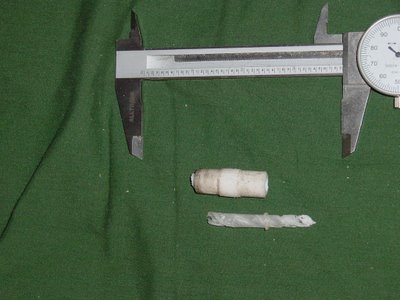 It seems apparent now that the vast majority of the thermal energy causing these melts is migrating up the shaft of the auger bit from the heated extruder barrel chamber. Interestingly, the distance into the polymer pump that the melt extended during the current 11 minute extrusion exercise seems to be about the same that was observed with extrusion exercises lasting only a very few minutes. I am looking forward to doubling the extrusion time when the new gear motor arrives and seeing if what happens with the melt length under those conditions.

Have anyone seen that
it is the blogs
1 year day today ?

Happy birthday to us :)

Forrest, would a teflon-lined cake tin be a less sticky alternative to a pyrex bowl?

***Forrest, would a teflon-lined cake tin be a less sticky alternative to a pyrex bowl?***

After my experience with the teflon-lined cookie sheet the notion that a large teflon-lined cake tin would work much better than the pyrex cake tin I was using did indeed cross my mind. I'll be trying one out just as soon as the new Siemens gear motor arrives next week. :-D

Have you considered adding some washing up liquid to the quenching bath to reduce the surface tension? That would help the polymer to sink below the surface more rapidly. You could then increase the density of the water (eg by dissolving a lot of salt into it) in order to control the rate at which the polymer sinks to the bottom.

Changing the temperature of the quenching bath also changes the density of the water in it, so you don't have the independent control of density and temperature that you may need here.