Results of a complete breadown of the quarter-inch extruder...

After having removed the auger and cleaned it I left the extruder barrel heater on at 120 Celsius to cook out the rest of the polymer out of the barrel. Afterwards, I disassembled the system completely.

What was more interesting was the observation that polymer had not only coated the hot end of the auger but also formed a nice tube between the auger and the inside the PTFE thermal barrier. 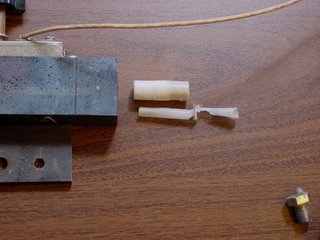 Not only had it done that, but it had also migrated another 24 mm up the polymer pump barrel even though molten polymer had not previously been observed on the auger that far back from the extruder barrel.

Given that the system had not been broken completely down for cleaning since it began to be operated it is not clear whether this polymer tube was formed all from the get-go or later on.

Two interesting observations came from looking at this CAPA tube. First, the swelling of the PTFE barrier comes from the inside and is expressed in the tube wall thickness. Second, and even more interestingly, the tube is a clear, clean white all the way down to the end of where it exits from the PTFE barrier into the extruder barrel. Extruded CAPA, on the other hand, has been a light silver-grey. Further, there are no flakes in the tube whereas you will occasionally see a flake of dark matter in the filament.

This argues that the CAPA goes from white to silver-grey in the extruder barrel.

Comments:
IIRC, fairly recently someone saw a vauge warning not to put CAPA in contact with some metals. Could this be why?

I was careful not to put CAPA in contact with any of the metals on the Dow list. :-)