This morning I made up a CAPA/marble dust mix of 1 part CAPA to 2 parts marble dust. By weight that is an 81% filler mix. I was able to extrude it with little trouble. 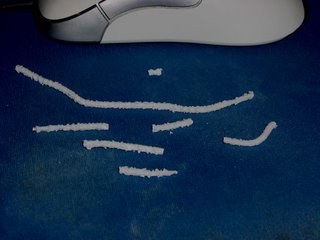 The resulting filament was spiky and rough to the touch. I am guessing but suspect that the spikes are pockets of marble dust. I would need a microscope and coloured CAPA to be certain.

After it cooled the filament could be broken with minimal bending. It was very fragile and as a support material would be perfect. It may be that we have to use this support material in rod form unless we want to use a little more CAPA in the mix. We can extrude it using retail marble dust for US$4.30/kg and US$2.50/kg for marble dust in 20 kg bags.

I suspect that the surface treatment of the filament would be better if the filler and polymer were more thoroughly mixed than I was able to do with a bamboo stick. It might be that we could get a filament that we could coil if we did that, too.

I shut down the electricity figuring that I had ruined the cartridge heater. After it cooled, I seated it in the extruder barrel and turned it back on. Amazingly, it worked perfectly. I have a whole new appreciation for ISM heating elements' robustness.

Comments:
How does icing sugar go?

Actually, I looked sugars up quite some time ago. You have to be very, very careful with them because they caramelise at quite low temperatures.

I'm not sure how Adrian plans to extrude them. I'm pretty sure that I can't make filament out of them for the Mk II, though. :-(

Adrian is going to use icing.

Table sugar and icing sugar are both sucrose.

Exactly my worry. That's way higher than the melting point of either CAPA or polymorph. While we could lay down a support structure using it, what happens if we have to lay molten sugar down on our polymer which has a much lower melting point?

I'm intrigued by this business that the CAPA comes close to floating.

Is it possible that by picking a slightly denser fluid than water (eg a heavy brine solution) that we could make it float? If so - then maybe you can lay down a layer of plastic onto the surface of a brine tank - let the liquid support it until it hardens (which ought to happen fairly fast since it's being quenched by the liquid). Once one layer of deposition is done, drop in some more water and proceed to the next layer.

It's a lot easier to wash off some salty water (or maybe engine oil - or whatever the plastic would float on) than it would be to get rid of sticky frosting. Also, it would be possible to recycle the brine or oil or whatever almost indefinitely - where it's hard to imagine recycling frosting.

CAPA's density is about 1.05 that of water. It tends to "float" because of surface tension's enhanced effect on a plastic that is very nearly neutrally buoyant.

I'm a little confused about your using a brine that would cause CAPA to float even better than it already does. Wouldn't you want to just dribble water in for a support material after anchoring the extrusion to the working surface?

I actually meant that it might be an idea to try mixing icing sugar with the CAPA instead of marble dust, rather than extruding sugar per se.

Not something you'd want to put in a water-bath though :)

I believe that the commercial filler used for these purposes is cornstarch.

Cornstarch is used when you are looking for biodegredation, after a fashion. It is a terrific explosive in a dust situation. I respect it far too much to want to be within half a mile of it.

You really need a big container to make it go bang in - a silo is ideal, but a big coffee tin will do at a pinch :)

Yes, in generations of working with starch powder (well, flour...fairly similar, chemically), my family hasn't yet seen an explosion. Do many bakers get blown up? Perhaps that's why millers used renewable energy rather than steam for so long a stretch of history...but seriously, you're being paranoid.

What about some kind of soluble salt as a filler? It's not hard to mill rock salt down to a fairly fine, non-flamable powder that won't encourage bacterial growth in the polyester.

While at university I worked summers at grain silos. Our lunchroom was 75 yards away from the silos and was enclosed in a fine-mesh screen of about the same quality as you see in miners' lanterns. To get into the lunch area, where you could smoke, you had to go through a flame-lock double door system. South Texas, where I worked, lost several silos to explosions every year. All you need for such an explosion is a big cloud of grain dust. It doesn't have to be enclosed. The mechanism is the same as is used in fuel-air bombs.

My idea was to use icing sugar mixed with water to make a paste that you could work at room temperature. As the filament we extrude is very fine it should dry and set quickly.

i totally agree, that would be awesome, we could then print a cup filled with coffee and two sugars or a plate with a cake and fork on it :)

(and we could finally say "yes you can!" to our beloved cat overlords when they asked "can i haz cheeseburger?" and no, i'm, sadly, not under the influence of a printed bottle of beer ;)