Hi guys, my name is James and, as part of my final year mech eng project under the guidance of Adrian, for the next few months I will (try to) assist in the development of this revolutionary machine called RepRap!!! I will be working on a mechanical syringe for the deposition of a support material. Upon building a working prototype I will then look at a selection of "alternative" support structure materials such as icing sugar in order to find a cheaper or more convienient material for the everyday person who will be using such a machine in the future. So far I have concieved three ideas for the syringe design: 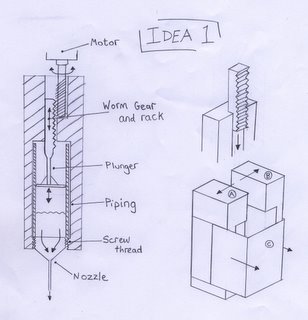 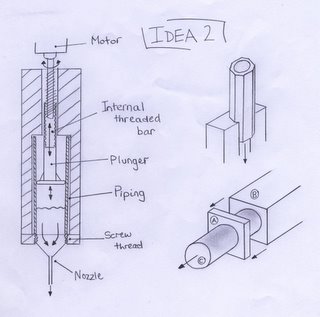 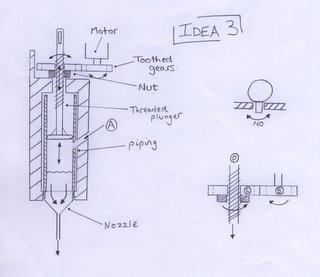 Of the three, I have decided to continue with idea 2 since it seemed the simplest and most reliable design. So now I have begun finalising the design, and will post an update when a prototype has been made and can be seen working.

Comments:
I thought Idea 2 too - ace!

If you're gonna RP the plunger I'd consider using an embedded nut to provide the internal female thread as the RP ABS will probably strip. The nut will maintain a more constant rotational resistance too (in the current design the deeper the drive studding goes into the plunger the more resistance it will meet due to increase contact area).

Design dimensions for embedded nuts are in the RP manual which you can find at http://reprapdoc.voodoo.co.nz/bin/view/Main/HintsForUsingTheStratasysDimensionRPMachine, or just give me a shout on ext 4254.

Is that using a commercial syringe head and body?

My first thought would be to make the plunger much chunkier, to prevent it bending and providing additional pressure that could cause unwanted oozing.

My second one is - how are you going to fill it?

Stick it in a jar of whatever, and run it backwards to suck some in?

I would go with idea 3 for several reasons. A, it does show some tubing which I assume is used to refill the syringe (I would move the inlet to the bottom and add an integrated one way valve); B, it is more modular and thus easier to modify/maintain/repair; C, the plunger shaft is solid instead of hollow and so inherently stronger per volume and simpler to manufacture in a non-RP (RepStrap) version; 4, said shaft could be made from standard threaded rod with an RP gasket at the end; E, there is no rule 6

Some other thoughts on syringe design. All your ideas seem to show liners on the bore, these should be fairly easily interchangeable so that one syringe can be used with various fluids without worrying about compatability with the walls or the previous load.
Also i think a channel or tube to refill the barrel from an attached reservoir is close to mandatory for any large scale use. Having to make the trip to a (possibly contaminated )open reservoir wastes time and even a large barrel is going to be relatively small in relation to lots of projects. With a tube connecting a one way valve at the base of the barrel to an arbitrarily large resevoir all you have to do is stop printing and reverse the plunger to recharge. You could also reload while traversing to the next print point. Volitile mixtures could be pumped with without loss of solvents (sealed system).
These folks:
http://ccsl.mae.cornell.edu/research/sff/index.htm
are doing some interesting stuff with rp and syringes including a zinc/air battery. One thing they found is that some fluids (zinc colloids as I recall) separate out very quickly. What are the possiblities for building a set of electromagnets (similarly arranged to a stepper motor) into the bottom of the barrel so that a teflon coated bearing could be used as a magnetic stirrer for such fluids?

"I see there is a new guy involved with the reprap. He is working on a
syringe method for injection using mechanical means. I am not able to put
comments on the blog as yet but could you pass onto him that using a
hydraulic or air bladder system to push the feed through would be less
liable to mechanical failure and easier to do.

One last thought: given the existance of the aforementioned in-the-barrel- mixer what are the possibilities for a 2(or more) barrel syringe for RPing reactive mixtures? Could heat resistent structures be built from fast set epoxy? Rescor makes a 2-part that hardens into a refractory matierial, and it is easy to imagine creating foamed matierials for insulation or cushioning. Elaborate and discuss.

On the two-barrel mixer idea, I can't remember if I ever blogged this (and am too lazy to check), but the problem is the epoxy setting in the very last stage - the mixer nozzle - when you've finished. So, whenever you make an epoxy part, RepRap starts by making itself a little new nozzle for next time, then makes the thing you want...

The assumption seems to be that the support material is going to be delivered in the same fashion as the polymer. What other alternatives have been looked at? Such as scraping a fine powder across the volume being reprapped with some kind of straight edge?

I'm sure this was all discussed extensively at some point, but are those discussions preserved somewhere? Like maybe back in the blog archives?

That is a super link and a super guy. I've emailed him and invited him to look at our project website.

***Such as scraping a fine powder across the volume being reprapped with some kind of straight edge? ***

I quite like that idea. Granular sugar would be a great media for that. It's dirt cheap in 20 kg sacks at Costco.

That's an interesting idea - sort of half FDM, half powderprint. I suspect the problem would be getting the powder to stay still while you extruded overhangs onto it. Nonetheless, it may well be worth looking at.

There are polymers which cure under ultraviolet light which could be extruded through an opaque nozzle. Ultravilet diodes are about 2 for 1$US (bought at electronics-goldmine.com) which should put out enough wattage if placed just outside the nozzle to cure the polymer. If power to the diodes was coupled to the plunger nothing should ever harden in the nozzle.
I realize this isn't a back-woods compatible approach but it might be a useful developmental or high-speed stage. One might be able to find a naturally photocuring plastic and use sunlight directed through fiberoptic lines (which can also be made from transparent plastics)
On the subject of "recruits": there are a few of folks over in BEAM robotics who have lots of experience creating tricky circuits, stepper motor drivers, etc. who could probably make a big contribution.
http://www.beam-online.com/ is a good place to look around also just some good, entertaining ideas.