I had some polypropylene cord lying around, so I decided to see if I could extrude it with the heated extruder barrel and piston that I've been using for the filled CAPA. It turns out that I can. I was able to force an extrusion at 155 degrees Celsius. I suspect that the temperature needed to be a bit higher and the rate of extrusion a bit smaller. As it was what I got looked rather like the result of stepping on a tube of toothpaste lying on the floor (yes, I have done this) with it's top off. I don't think that I will include a pic of this particular result. :-s

Another hopeful effect was that most of the contact points between different parts of the filament aggregation were thermally welded together. Not all were, though.

This evening I ran another exercise with polypropylene at 165 degrees Celsius and a slower, more controlled extrusion rate. Although the filament quality was still poor, it ran at a diameter of about 3.15 mm. It was also warm enough that it did not tend to tangle as it did with the first experiment. The melting point of polypropylene is listed in the literature at 170 Celsius. One usually expects the working temperature of the polymer to be considerably higher than its melting point. 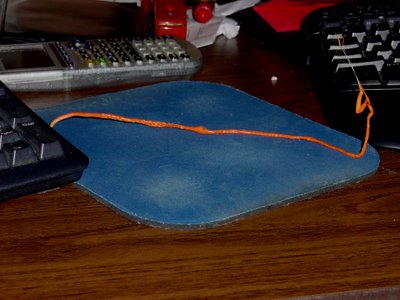 Oddly, while more force was required to create a filament than was the case with filled CAPA polymer it was not an excessive amount of force.

I suspect that polypropylene is about the highest temperature polymer that it might be possible to use in a reprap. My worry is that an extrusion thread will cool too quickly to weld onto previous layers in a room temperature environment.

It would be fun and informative to see if a Mk II could produce the temperatures necessary to melt a polypropylene filament and whether we could prototype with this polymer.

One thing to remember about polypropylene is that it won't melt on a hot day or if you spill your tea on it. It also costs 35% of what CAPA does. That's why I keep looking at it. :-)

Comments:
//I suspect that polypropylene is about the highest temperature polymer that it might be possible to use in a reprap.//

I guess PETE and HDPE are a definite no-go, then.

I'd guess that PETE is definitely out with a melting point of 260 Celsius. That is right at the service limits of the PTFE parts that we depend on in Mk II.

HDPE, otoh, is definitely a go with a melting point of only around 120-130 Celsius. Polypropylene is melting at about 150-160 Celsius.

Another nice thing about polypro is that it's dishwasher safe (top rack only). That will come in handy if you use a solid, water-soluble support material.

I did a few simple tests with HDPE and PET. PET Was definitely out for the basic experimenting - it wanted too much heat. So I melted up a batch of HDPE from milk bottles. I found it was reluctant to fuse and distorted significantly when cooled. It is probably possible, but not an easy one at this point.