Electronics from Kicad and laserprinted PCBs

I've been experimenting with the open-source Kicad electronic design system.

It's not too bad. After you get through the usual "How the *!$*? do I do X?" stage at the start (the manual is OK, but - of course - manuals are for wimps...) you can create schematics quite quickly. Here is a small variation on Simon's extruder controller: 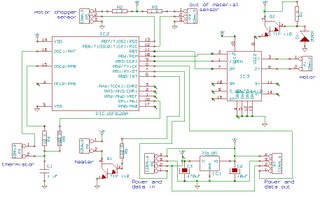 That took me about an hour once I got up to speed. Kicad's automatic PCB layout tools are almost useless, but its systems to assist manual layout are very good - they are clear, and don't allow you to make mistakes. Here's the PCB for the above circuit: 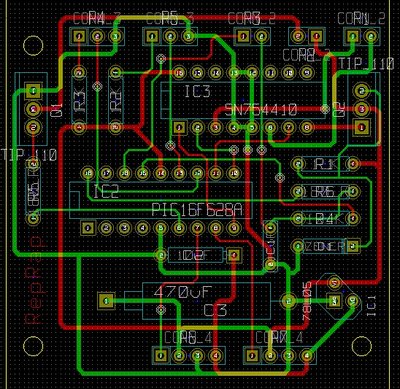 That took me about an hour too. (If you want to use Kicad install it somewhere where users will have write access to its libraries. You don't want to edit the layouts for existing chips etc., but the easiest way to add new ones is to copy and edit something similar.)

So next I decided to try to make the PCB using the laserprint-and-iron method. This wasn't such a success. I selected Kicad's high-res PCB plot option and created two postscript files, one for the reverse of the PCB and one for the obverse (component) side. The latter needs to be mirrored, of course. I then used an old HP Laserjet 6MP to print them. They came out very cleanly.

I cut the top edge of the paper on one to make them different sizes, then lined them up on a light box and taped them along the cut edge so they stayed in registration. You could probably do this almost as easily by holding them against a sunny window.

Then I cut a piece of blank double-sided PCB, cleaned it with wire wool and detergent, and taped it between the two prints.

I ironed the result on both sides. You have to take your time over this, apply plenty of heat, and be particularly thorough about the corners. The toner melts onto the PCB and sticks the paper down. You then drop it in warm soapy water and wait.

Here you need patience. If you try to rub the paper away from the toner stuck to the PCB too quickly it tears the pattern. Here's one, however, that I left for a whole day, which ought to be long enough. There are granules of polymorph in the bottom to give the soapy water access to both sides. I rubbed off the (now quite weak) paper. As you can see, the tracks still have gaps. I have tried a number of different papers, all with much the same result: 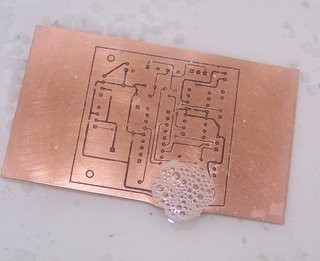 In order to avoid getting through square meters of PCB while conducting dud experiments, you need a way to clean the laser toner off. I found that 2-butanone (which I happened to have in my lab at home) worked well; this means that acetone would almost certainly do as well. Use both in a well-ventilated area, of course, and flirt but cautiously with naked flames...

Word on the web is that you need to use special water-soluble paper, which sounds reasonable. Here are a couple of suppliers:

I'll see if I can get some in the UK and experiment more.

More Google: other word is that the stuff to use is Press-n-peel. Opinion is divided: half the hits swear by it; the other half swear at it... I've ordered some; watch this space.

Comments:
The software looks useful, but does anyone know of a source where it can be obtained on disk? I'm not exactly hooked up to a T-1 line here, more like a tin can with a string attached. LOL Downloading the whole thing could keep my line tied up for a week or more.

Adrian, that looks perfectly beautiful. It would look even more beautiful if I hadn't sent my son off to university with my laser printer and kept the colour inkjet here. :-(

So print it out on the inkjet, and get it photocopied at Kinko's.

I wonder about the feasiblity of running the same piece of paper through the photocopier several times, to build up a thicker deposit of toner.

Gad, you're right. I'm not thinking straight. I'm just aching and too punchy from running a drill press and sawing steel all day.

I like the multiple photocopy idea, but how would you keep it in registration? And where the laser toner sticks from one pass it does seem plenty thick enough to resist the ferric chloride.

In a pinch I can manually lay out boards on my cad system at work, but this program looks to be worth having.

Hm, how well DO photo-copiers register from one copy to the next? Sounds like an empirical question to me.

Just a thought - you have the RepRap capable of drawing in 3 dimensions - why not use a protective marker directly on the board and draw it in 2?

Could even try one of those "conductive" pens on a blank piece of plastic!

If nothing else, it would make an interesting experiment.