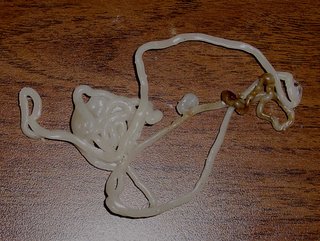 This evening I made another extrusion test. This time I began with a thoroughly cleaned extruder assembly and used a quenching bath heated to about 55 degrees. The extruder barrel was heated to 120 degrees. CAPA 6406 was used.

As you can see in the picture the first few centimeters of extrusion was darkly coloured. Interestingly though after that the filament was a uniform white very much the same colour as the CAPA 6800 pellets.

Filament diameter varied between 2.9 and 3.2 mm. Approximately 450 mm of filament was extruded which weighed 3.6-3.8 grams in a matter of a few minutes.

Using the heated quenching bath changed the nature of the extrusion filament dramatically. This filament was flexible. As well, the warm water was much more forgiving of irregular extrusion rates. No serious weakpoints in the extruded filament were observed.

One change that wants making in the version 2 extruder is a different feed arrangement. Version one was designed to be operated in a horizontal position. This creates flow problems for the polymer powder into the feed chamber.

Afterwards, I cooked off the extruder barrel and removed the auger. The auger was covered with melt for the length of the PTFE thermal barrier. There were a few small bits of partially molten polymer powder in the feed barrel near the PTFE thermal barrier. Similarly, there was a bit of molten polymer powder at the end of the PTFE barrier on the extruder barrel side. These "bits" were a few mm in length and width and perhaps half a mm thick.

Clearly, the CAPA tube that had formed in PTFE barrel had done so over several operating cycles.

Right now the length of operation of the extruder is dependent on the time that it takes the duct tape joint between the electric screwdriver and the auger to fail. It will be interesting to create a joint which will not break and then let the extruder pump clean itself to see if that makes cleaning the system easier.

Comments:
Note, I'm making the extruder pump bodies today. I'll do the tough part first, and wait on the feed port until we've had a chance to discuss it. Sounds like you might want that hole to enter on an angle...

What about just having the auger enter a funnel-shaped hole vertically, and extending the bracing for the auger across the mouth of the funnel?

Then you just pour CAPA in a hole at the top. The motion of the auger keeps the feed going, so it shouldn't clog. If it does, add an armature to the auger - it doesn;t have to be a very robust one, just enough to tickle the pellets or powder.

Hmmm... sounds like a pretty good idea, except for resisting the axial thrust attempting to push the auger out of the polymer pump barrel. I don't know how hard it would be to machine a tapered hole like that, though. As it is we're putting in a 45 degree angle into the side of the polymer pump barrel now. That leaves us a back plate on the pump to attach a thrust bearing for the auger.

Tapered holes are pretty easy to do, but containing your thrust bearing will take a little thought. What degree of thrust are you anticipating?

This is looking good.

That discolouration: did you ever get an answer on why CAPA and copper alloys shouldn't come into contact? And is there any copper or brass around in your experiments? I noticed a similar effect with some of mine, and I wonder if there's a reaction going on.

Dow was the outfit that made the comment about copper and zinc not going well with CAPA. I haven't followed up with that but rather made sure that none of the offending metals were in version 1 of the quarter-inch extruder.

It's beginning to look like the discolouration is a function of not cleaning out the extruder regularly. I recall from the last few times I visited extruder production lines that the first few feet of extrusion were always thrown away for reasons of discolouration or worry that a shift in polymer/additives mix would have been extruding off-spec product. Mind, most of the extrusion machines I've seen were using PVC mixes, so I'm sort of talking apples and tangerines here. :-(

This time around I'm suspecting that it is exactly what it looks like, viz, rust out of the extruder barrel. That cold rolled steel rusts at the drop of a hat.

Hopefully, this problem will disappear when the version 2 barrels made from stainless steel start to be used.