The weather held this weekend so I was able to almost finish the 6.35 mm filament extruder prototype. 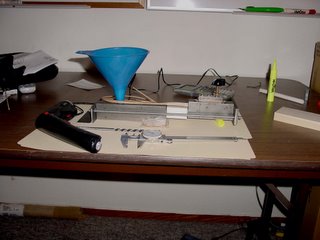 I am using Adrian's size convention in setting the calipers open to 20 mm for scale.

You can see that it bears a close resemblance to what my design study conception looked like. 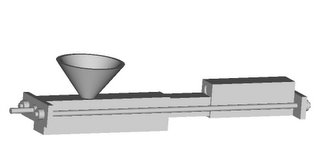 I oversized the PTFE sleeve in the thermal barrier so the design sags a bit right now. Following Brett's suggestion I will put a third support plate between the polymer pump and the PTFE thermal barrier to counteract any tendency towards buckling and more importantly, to provide a bit more support to the heavy steel extruder barrel to at the right hand side. That plate will support the retaining rods via PTFE sleeves so that heat moving down the retaining rods won't be transferred into the front of the polymer pump.

I had originally thought to use a 1 x 1 x 2 inch PTFE thermal barrier with two PTFE cylindrical plugs to connect it to the polymer pump at the left and the heated extruder barrel at the right. While I was building the extruder I realised that that would make four potential gaps in the polymer flow path between the pump and the extruder tip. I brought that down to two by drilling out a 1/2 inch cylinder of PTFE and then drilling a 1/2 inch hole in the 1 x 1 x 2 inch PTFE bar so that it acted as a sleeve for the cylinder. That worked quite nicely. 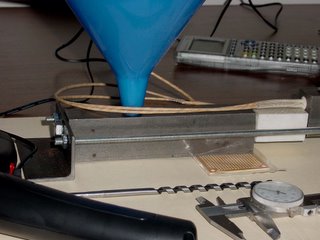 Here is a detail of the polymer pump. I got too tired to finish the thrust bushing for the auger bit so the auger is seen lying in the foreground of the pump. I am using an ordinary plastic funnel for a polymer feed hopper. 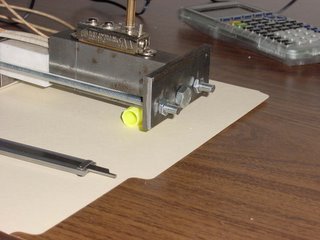 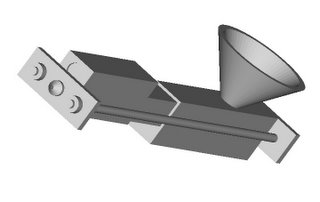 Finally, here is a detail of the extruder block and a mockup (3/8 -24 1/2 inch bolt) of the extruder tip. Again, I was too tired at the end of the day to attempt to drill out an extruder tip. I've done trial runs on both the extruder tip and the thrust bushing, both made from 3/8 inch bolts and found that to be very finicky work. I've got a handful of the bolts so I can afford a lot of errors. :-)

You can see the wires from the cartridge heater in the photo and also the thermostat sitting atop the heated extrusion barrel.

I have to tap in the thermostat and lock the extruder down on a block. I also have to mate the shank of the auger bit with the electric screwdriver you've seen in the pictures. That all will take another morning, I expect.

It's going to be another two-tylenol night. Right now I am for some supper, a shot of MacAllan 12 year old, a movie, a hot bubble bath and a good sleep. It's supposed to begin to storm in about an hour. We've got another pineapple express storm that's come up from Hawai'i this evening.