This is the twist drill extruder (just about) working. Here's a close-up of the polymorph extrudate: 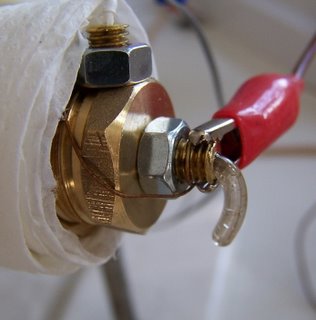 1. It needs a lot more power for heating. I had three 12 ohm nichrome wires being driven at 12v; i.e. about 36W. It took forever to warm up, eventually reaching a steady-state of about 120oC. But it had to be insulated (or wrapped in paper kitchen towel... kids, if you want to burn down your home, try this - the nichrome gets red-hot where it's in thin air, and sets fire to the paper; see the singed bit where the wires go in in the top picture.) I need to do a re-design heated by a cheap but chunky soldering iron; I think about 100W should do it.

2. The extruder nozzle is 2.5 mm in diameter. This gave an extrusion (with die swell) of 3.15 mm diameter, which is pretty close to what we need.

3. The extrudate has a few bubbles in; more alarmingly, it has pretty flakes of brass/copper swarf. When you turn the drill in air, it doesn't scrape off the sides at all because it's going anti-clockwise. But I suspect the much higher forces involved when the polymer is in there cause it to damage the copper and brass. Thought needed.

Comments:
YES!! Wonderful! How about the feed jamming problem? Any more of that?

What sort of rpms were required to get it to pump?

So is it eating full-sized pellets?

***But I suspect the much higher forces involved when the polymer is in there cause it to damage the copper and brass. Thought needed.***

Before you do a lot of redesign you may want to run a considerable mass of polymer through the system to see whether this is a continuing problem or a startup issue that goes away once the moving parts wear in.

It may be that you want to use a harder steel for the pump barrel.

Feed jamming temproarily solved by poking the full-size granules with the end of an allen key...

It was going about 30 RPM. It would have gone a lot faster, which would have been better in lots of ways (apart from anything else, a bit of frictional heating wouldn't go amiss...), but the retort stand upon which it was mounted couldn't take the torque from the electric screwdriver going any faster. This prob. is obviously easy to fix.

I agree on using steel (though its heat conduction wouldn't be so good). But the nice thing about the copper and brass is that they are all so widely and cheaply available, being ubiquitous in plumbing.

I'm using steel pipe for the barrel of mine and I'll be thermally isolating the heated extruder barrel from the screw pump with PTFE like you did in Mk II. I'm hoping that will solve the problem that you've encountered with jamming in the feed hopper.

Still, in my system the steel in the pipe is a LOT softer than the cobalt steel of the drill bit so I may be having the same sorts of swarf problems.

Did you use that insulated nichrome? Does it work?

With respect to getting more power into the thing, if your power supply could handle it, you could just use less nichrome. (12V)^2/2ohm=72W. 6 amps, though, which is a bit of a draw.

I'm left wondering if wall power might be the way to go for this particular aspect - although I think there are some peculiarities there with how much power a particular load will draw on A.C, and the higher voltages do bring an element of hazard.

LOL! Amazing! I just came to the same conclusion. Cartridge heaters using mains power AC current are cheap and easy to acquire. I already have one from a previous project that I abandoned and I even have a thermostat that I can strap onto the extruder to go with it. HA! :-D

With cartridge heaters you don't worry about those fiddly issues of whether or not you have insulation on your nichrome heater.

3.15 mm is exactly where you want to be: In commercial extrusion, we extrude the part oversized by anywhere from 5-25%, and then draw it down to the precise size we want by adjusting the speed at which we pull on it.

Get a good length of the extrudate out, to the point where it's solidified, run it between two pinch rollers, one free wheeling, one servo driven, and you've got everything you need for precision diameter control.

"It may be that you want to use a harder steel for the pump barrel."

Perhaps you want to dull the drill. It IS meant to cut, after all, and has sharp edges you don't need in this application. Of course, you might try chrome plating the interior of the pipe, too; It's not all that difficult, and chrome plating is quite hard.

If this is to be a part of the RepRap machine (as opposed to a feeder for it) I'd like to avoid mains power if I can - we want it to work in the back of beyond off a car battery if need be. But I agree that cutting the resistance and upping the current starts to look a bit greedy on amps.

Forrest - I did swap in your insulated nichrome; it makes things a lot easier; thanks.

Brett - I like your idea of chrome plating, especially as it should be easy to do on brass and copper, and just as effective there as on steel.

I didn't dull the drill bit, because it's turning backwards. But now I think I'll run the corner of a grinding wheel down the flutes to see if that helps.

Mark you - dismantling the thing when it's cold and full of polymer is a bugger; and dropping it into boiling water is not as helpful as one would like...

I believe a car battery is capable of supplying some impressive amperage - From a quick google for figures, it looks like they can typically supply something like 400-1000 A for at least thirty seconds, and can deal with 25A for something on the order of two hours. And that's without needing to run the engine...

The only difference in the design I can see would probably be a good relay to control the mains voltage as opposed to a smaller one for the 12V, and the actual resistence value of the nichrome. All three ways seem to work, though - it's just a matter of having the right power supply.