Making the second z-y stage only took about two hours. There was much less fumbling around this time. I'm tempted to make a third one and throw the first one away. 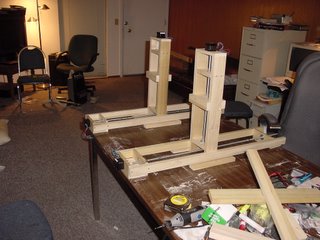 I may do that later on.

The y stage towers move easily with a touch of the finger. There was much less friction in the system than I had thought. Of course, the acid test will be when I load the x-axis onto those towers. I've calculated that loading to be no more than about 3 kg split two ways between the towers so it should not be terrible.

I did make one small mistake on the second one though. I took a centre measurement to be a top end measurement on the top bearing plate. 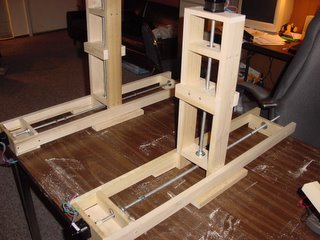 It will only take about 10 minutes to shift that upwards, but I'm not going to fix that tonight. 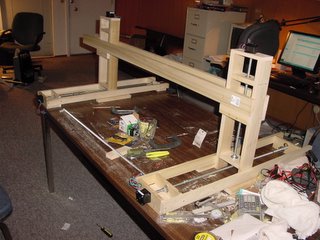 In the last pic I've mocked up the x-axis so that you can get a feel for the overall size of godzilla. It got considerably wider when I decided that it would be best to keep the x-axis threaded rod on the centre-line between the two towers. That meant that I had to handle the full 36" of the rod plus the connector plus the stepper. Oh well, I didn't really want to throw any dinner parties this year. :-)

I c-clamped the beams onto the towers and checked the resistance to movement. It's more substantial than before, but still no big strain from a purely qualitative standpoint.