I put the admin to one side last week and designed the z-axis for ARNIE. Here's a picture of her (he's got gender issues) without the timing belt for clarity: 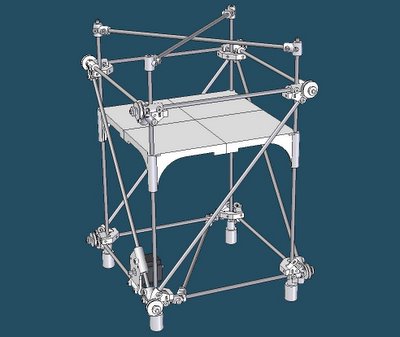 There's an idler at the end of each angle bracket which winds the timing belt around the frame in a series of N's. They link to the z-bed on the verticals (stays have yet to be added to the table). The X & Y will be added to the top once I've built the Z and am happy that she'll fly.

There's a fair bit of tweaking before I go for a build - the corner brackets will take 6 hours each so it's worth getting it right first time!

It's getting a bit confusing as to which progress announcements belong with which construction effort!

Is there a way to separate out the various implementations - either by using a consistent name at the start of the subject line or something?

Well, they'll merge anyway, so why bother separating them :)

That's a real beast of a machine there, Ed. I've got to see that one going!

It's easy enough. Mine is Godzilla. Ed's is ARNIE. I don't know what Simon and Vik call their respective repraps.

If the names aren't compelling the team members pretty much always blog their own prototypes so you can identify them by team member name.

The first one was "The Meccano Prototype", then came "The Godawful Hybrid" and now we have "Da Witch". The latter is named because the front panel came from a well-labeled "Da[ta S]witch" which was easily modified with a wire brush.

It's a good witch, like Glinda of the North :)

I'm tempted to use Plaasjaapie's naming convention, and call mine King Ghidora. LOL

Ed, I'll be interested to see how your X-Y positioning rig sits on that z rig.

Am I correct in assuming that you used the Stratasys to build the four of those modules that you are bolting together to make the work surface?

I feel as if I'm sitting in a room with a flip chart and a bunch of marketing types. "Now, what name will maximise leveraged income on the bottom line?"

When we get to Release 1, I propose to exercise my originator's rights (about the only time I'll do so) and call the versions of the machine after biologists. We'll start with Darwin, of course.

The son or the father to whom the son's ideas are often attributed? :-D

That's right. The one who got down to it, did the research and made the world aware of it :)

> I've got to see that one going!
Er yeh, the more I look at it the more sceptical I get. I have a pint on with myself as to whether it'll work or not. I'm not going to look a it anymore... time to build.

> I'll be interested to see how your X-Y positioning rig sits on that z rig.
I've reckon it should be similar to my first axis design, copied twice for both X & Y. I'm itching to start the design, but I'm gonna be grown up and wait for the z-motion results...

> Am I correct in assuming that you used the Stratasys to build the four of those modules that you are bolting together to make the work surface?
Yup.

> How much are you all paying per kg of filament for the Stratasys over there?
Loads. It's daylight robbery. I'll find out the weight in each cart, but each cart's over £300.

> "Now, what name will maximise leveraged income on the bottom line?"
Happy to shelve ARNIE from the public! How about something placid like "Samantha" ;-)