Galacticroot over at CNC created a screw pump for wax that was my initial model for how to do things. 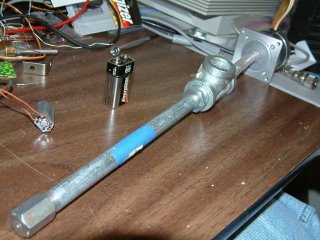 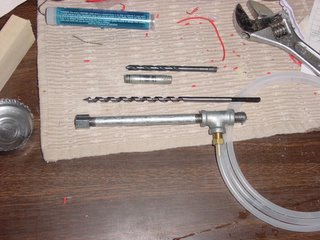 The first thing I tried was a 1/4 inch metal bit. I used my electric drill for power and initially tried to pump water with it. You can see it and the barrel that housed it at the top of the picture. The first thing I noticed was that the metal bit pump would not self-prime. I primed the pump and ran it again. At that point I observed that the metal bit would not pump water under any circumstances. Indeed, it seemed to slow down the natural flow of water through the pump. Reversing the rotation of the bit made no difference save that a bit of water began to flow out of the pump at the end closest to the drill and the flow out of the extruder hole pretty much stopped.

At that point I decided that the fit of the drill in the barrel was too loose. I greased the barrel heavily with petroleum grease, reprimed the pump and tried again. There was no useful pumping being done. I observed a tiny bit of pumping in the reverse direction but nothing significant.

Having failed I went back to the literature. The first thing I noticed is that the diagrams I had showed the flight (thread) length on such drawings as I had pretty much identical to the gross diameter of the screw.

On our 1/4 inch metal drill the flight length was twice (1/2 inch) the diameter. As well, the proportional depth of the threads was much, much larger than what you encountered on a polymer pumping screw. Indeed, there was little core shaft as such in a metal drill.

Next, I tried a wood auger. The flight length of the wood auger was 3/8th inch for the 1/4 inch diameter as opposed to 1/2 inch found in the metal bit. The wood auger was also much longer with many more flights over its length. I acquired a longer barrel and rebuilt the pump. That configuration can be seen in the picture above.

I installed the wood auger, greased the assembly, primed the pump and began again. With the wood auger I got an appreciable pumping action, but nothing useful. Looking more closely at the wood auger it was easy to see that the depth of the flight was proportionally huge compared to a polymer pump screw. There was again almost no core to this auger.

There are several types of masonry bits. Revisiting the local hardware store I encountered one proportionally almost identical in form to a polymer pump. Sadly, it was 3/16ths inch rather than 1/4. All of the other masonry bits were simple twisted rods and apparently useless.

In the morning I will visit a much larger hardware store and see if I can acquire proper masonry bit to continue the experiments.

How long does the screw have to be?

If a shorter screw would suffice, you might try getting hold of a worm gear then drilling a hole in a block of something to match the external diameter.

Where is the CNC location you referred to at the start? I'd like to have a play with some wax too.

That's where you find the GalacticRoot/CNC stuff. They've got a fun forum there.

As to how long the screw has to be I don't know. Adrian may know by Monday, though. He's said he's going to play with the concept this weekend and when Adrian plays things get done in a big way. :-)

I think viscosity is key here. If you consider the liquid being driven round and round in the flutes of the drill bit, it needs to have something to resist that if it is to be driven axially along. The only thing that resists the rotation is the viscous shear with the stationary cylindrical walls. The bigger that is, the more axial force you have driving the liquid along.

So water won't work well. Helium II won't work at all. Syrup should go nicely though. An experiment to try with your rig, Forrest?

It's worth a try. I have some maple syrup. I'll have to spoon it in to the "t" juntion/ I already got it to pump granules, though.

The problem is that the drill I have tends to have a lowest rotation rate that is a bit high.