My sister's new quarter horse arrived unexpectedly from Wyoming this afternoon. The rancher that sold it to her had got angry with the transport company and decided to move half a dozen horses in the middle of winter himself instead. She got a call from his cell phone when he was crossing the Donner Pass in the Sierras. She called me shortly afterwards to ask me to bring around the company digital camera so that she could properly document her new acquisition. He's a beautiful four years old quarter horse that has been trained up as a working cattle horse. Even for a quarter horse he is unusually muscular and brings to mind more of a D-9 Caterpillar tractor than a horse. Still, he is gaited and has a very smooth ride.

While I was there I asked my brother-in-law if he remembered having an old meat grinder lying around. I recalled seeing one in his shop some time ago. As it happened he has about thirty meat grinders in a storage cabinet. My brother-in-law is an avid collector of antiques of all sorts. I brought home two, a very old Keystone and a not-so-old Universal #2 that looked rather like this. 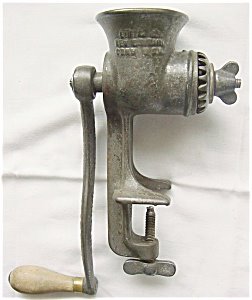 It had a variety of cutting heads which I tried with CAPA 6800 before settling for the one shown in this picture that I found using Google Image search. I would have photographed it and the results of the grinding exercise except that the camera is currently being used on the new quarter horse.

My first mistake with it was to fill the hopper with CAPA 6800. Not! It could comfortably handle about 1-2 grams at a time. CAPA 6800 is incredibly tough. I ran the same 4 grams through about twenty times before being happy with the result. An inclined screen to separate the fully milled polymer from that needing further processing would have been useful. As well a shield to keep a considerable amount of the original pellets from coming out of the cutting face like popcorn would have been useful as well.

The cutting head of the Universal #2 got quite warm even with the very low feed rate that I was using on it.

While I am going to be able to grind feed stock for the 6.35 mm polymer screw pump I don't think that hand grinding is going to be a practical way to prepare polymer for making into filament in the field. We can probably draft an electrical meat grinder into service for the task. Even so, though we are going to have to develop some sort of automated feed mechanism to avoid overloading it and have a vibrating screen as well to segregate the finished meal from polymer needing to be recycled into the grinder again. I suspect that we ought to be able to design something for this part of the system and RepRap it without a lot of trouble. The grinder and screw, however, will have to be steel.