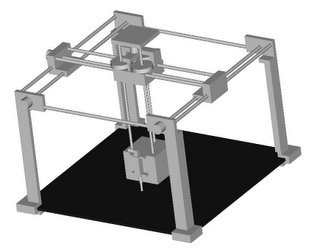 I spent the weekend using AoI to explore the volumetric aspects of using existing design approaches to create a Cartesian reprap machine. The chief difference between the machine designed and existing efforts is that the extruder rather than the working surface is moved along the vertical axis.

A 12 mm plate of tempered float glass is used for the working surface. The machine's footprint is roughly 90x90x60 cm. The working volume for the design is about 70x70x36 cm.

Comments:
Any pictures of the extruder frame yet? I'd like to have something to include in the presentation - I don't think I'm allowed to freely distribute the Gingery plans or am I?

No, I doubt that the Gingery people would approve. When do you need the pics by? I'm going to try to get some hours in this week and maybe a few on the weekend. I've also got to do some taxes on Saturday, however, a task that sort of saps my creative juices. :-(

Not yet, Ed. It would certainly be a fun design exercise though. Have you had a chance to flesh out that docking system for extruders yet?

Vik, it just hit me that I'm being silly about the Gingery plans. It would seem to me that a publication of the general sense of their extruder design would actually encourage sales of their detailed design book and would work as advertising for them and a hook into their other publications. Let me call them and float the idea.

Can you give me an idea of what you'd like to show in your presentation?

I was going to mention lateral support to the head, but just read the email and you're way ahead of me ;)

Have you had a chance to flesh out that docking system for extruders yet?

It's definitely on the cards, but I'm still playing with string at the moment. And that could take a while.