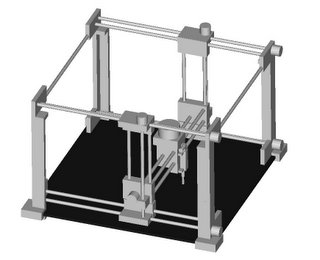 The more I looked at this weekend's design the less I liked it. It just lacks elegance. I hate designs that degenerate into more patches than design.

Last night I had a small epiphany and threw out the geared vertical axis drive and decided to do the whole thing with threaded rod drives. This design emerged from that restriction.

I think that this one is stable enough to use for an anvil. It looks to me to be an intrinsically stable design, which my last effort was not.

It has seven steppers. I am pretty sure that I could reduce that to four, though that would mean adding some material to the design, something I hesitate to do. I would rather use a lot of small steppers working in tandem than fewer, larger ones.

I will probably hate this one tomorrow, too... ...but that is what doing design charrettes is all about, hey? :-)