Closing in on Godzilla... 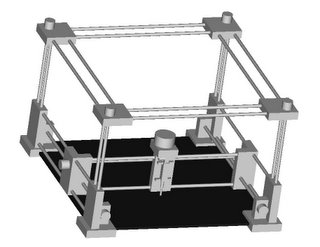 The design has several advantages. It's scalable and the steppers don't have to be very big. I swapped around the axes so that the z axis, which has four steppers, also requires the most torque. The vast majority of the stepper usage will be limited to three steppers rather than five, as it was in the first design iteration.

I've specified NEMA 17's, which are probably overkill. I can get them for US$9.95/unit, though. If Simon's experiment is successful I'll be able to run this with a 120-150 watt power supply and three controllers.

There is also no reason whatsoever why we can't use it to fabricate a stepper-powered lazy suzan that we can centre in the work space and use the reprap along one centred axis to make radial objects like gears and such not till the sun goes cold.

Comments:
I really like how this design is coming along... I especially like seeing the incremental changes and developments.

What is the possibility of you posting the file you used to generate these images of it for others to modify / examine?

Also, I'm interested in creating a prototype /beta reprap. How soon until there is a design that is solid enough that one could download it, create the individual parts, piece them together, and have a mostly functioning unit?

I'd definitely love to help out and I would be more than willing to document the build process, write out detailed parts lists, etc. I think the reprap project has amazing potential and I've been a little bummed (*only a little*) that it has just been mockups and 3d stuff so far. I know I may be jumping the gun but I would love to be able to see a repository of files, a parts list, and basic instructions for creating v0.1.

Let me know what I can do along those lines, or if it is even too early to be starting down those lines.

No problem with popping you the AoI file for any of the design charette's I've posted. I just need an email address.

If you will look in the Wiki you will see pretty much what you are asking for. We have a solid extruder design in the Mark 2 that Ed and Adrian have done. Vik has got a threaded rod driven positioning stage working and a z-axis positioning stage. Simon is not far behind in that regard as best as I can see in that regard and Simon, Ed, Adriaan and Vik seem to have the controller circuitry pretty much sorted out. A lot of the documentation for all that is in the Wiki.

As for v0.1 I think there will be five or maybe six (I'm not sure where Hans Warger's design work fits in) species.

Ed is looking at a x/y belt driven positioning stage with the work surface raised and lowered as the z stage.

Vik has the same general idea with a threaded rod driven positioning stage.

Simon has a similar design with a rotating work surface that will allow for extruding radial objects very nicely.

Brett is going for the very heterodox Stewart Platform approach.

I've lifted working techniques from Vik and Simon but will move the extruder head in the z direction rather than the work surface.

I think everybody is going to use the Mk 2 extruder on this round.

wow, thats really awesome. i am definitely going to have to check out the wiki.

Bear in mind that there are several other materials we will be depositing in the "final" unit, so the short timescale given above is a guestimate for the prototype plastic extrusion systems only. Being able to cleanly integrate circuitry and support material etc. might take another 2-3 years.

However, it's still going to be a heck of a milestone.

Hi,
I've been following your project for a while now, I've been running through some ideas of my own, what I am currently most concerned with is the ease/possibility of extruding plastics to a high enough tolerance. It is possible to find micro drill bits down to about .05mm, although these are difficult to use and come by, furthermore it is not clear that they would produce a satisfactory nozzle. the smallest microtubing that I have been able to find and purchase comes to about 0.1mm.

Soon I hope to test an extruder made from a pressurized resevoir with attached microtubing and a calibrated piston. I dont like the complexity that this adds over the mk2, but think that precisely controlled disposition is going to be a big challenge either way.

Tworads the design goal of ultimately printing the majority of the device, I beleive we can acheive good pressurizing results using o-rings in channels in extruded peices. (think of a polymorph piston with o-ring piston rings)

Anyways, I also would love to get involved in some way, looks like a great project

I would be very disappointed if there were ever a "final" unit. I expect that once we have more than one prototyper in operation so that we can hand out components to new people the number of participants in the project will snowball. At that point we'll have to open a multithreaded forum to handle the information flow. I also expect that a barter trade in subassemblies will develop there as people want to get involved who are innocent of the skills that the present team members possess.

The question then will be one of how we will be able to manage the avalanche of creativity that will be unleashed. :-D

Fine nozzles are easy, and are covered in the Afghan Lathe document:

Just drill a 0.5mm hole in the end of your brass nozzle. Insert a piece of nichrome or stainless steel wire in the hole, and surround it with solder. When the solder has solidified, pull out the wire. One hole, same diameter as the wire.

i agree with your last comments. like adrian said, this is going to be subject to evolution. just like software, there will always be more tweaks and various different uses (and requirements) for the reprap.

personally, i think we will see a few waves of adopters as the project solidifies. the first ones, you guys, who are working from scratch and really exploring the frontier are the hardcore.

then, once the design gets solidified down to a documented design (much like the extruder documentation... which is very excellent) alot more people will join in, interested in trying the design out 'just in case it works'. these people are more early adopters who want to be part of the action, yet may not have access to some of the tools required to create some pieces. this will be important since they will be contributing bug reports, ideas for upgrades and such. i could really see this project taking off on a massive scale once there is a solid design.

the one thing i think is really important, is documentation. until assembly becomes automated, this is really a do it yourself type project. unfortunately, not everyone is as skilled, smart, or as well equipped as you guys. but if there is a forum and user groups and well-written, fully illustrated construction guides, then it would really, truly be accessible to the average person.

another thing that i would love to see is a market come together to provide parts and kits for the reprap. it would really help the project take off. it would be really awesome to be able to buy whatever part for the reprap you cant create yourself. since the stuff is gpl, it would be legal to sell. not only that, but since there would be no restrictions on who could make and sell reprap parts, free market economy would ensure that prices remained as low as possible. personally, i would love to be able to buy it directly to the people who are actively involved in the project (wink, wink) so that i know that whatever profit was made, goes directly to improving the project.