Ready for the drill press... 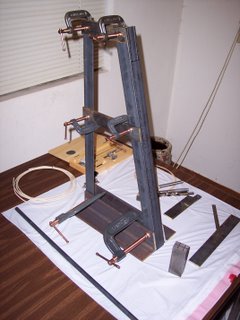 The Gingery design has detailed instructions about where you have to drill holes so that the steel parts can be bolted together. Fortunately, I remembered a little trick my father, who used to run an ordinance and repair depot for the Army, once told me about. Simply said, you use c-clamps to assemble the parts into their final form and then put the assembly under the drill press, removing one clamp at a time and drilling the holes for the connecting bolts through both members at the same time. Doing that is about ten times faster and a lot less error prone than drilling and afterwards assembling the parts.

I am also going to take a first run at drilling the extruder block for the piston and heater cartridge. Wish me luck on that. I've never tried to drill an accurate hole through four inches of hard steel in a close tolerance situation.

Comments:
Take your time and get rid of the swarf often.

You'll have the block secured in that jig (maybe even by its mounting holes too), so it sounds like a case of one hand on the drill press, the other wrapped around a mug of your preferred beverage...

I had a bucket full of swarf by the time I came home.

I drilled the extruder block this afternoon. Cold rolled steel is a bad material to use in that it has extremely hard places inside of it that tend to deflect a drill when you are doing 4 inch holes. As it was I have a workable block now. It's ugly but I can make it work with a bit of shim. I have to saw a new guide block and drill that one again. I practiced on the guide block and made a mess of it.

Half inch round is only approximately round. I was able to get it to work smoothly with the extruder block by putting it in the drill press and using emery cloth on it. The cartridge heater fit first time out.

Next time I'll try aluminum or brass for that extruder block.

Much better, a squirt bottle of coolant, preferably soluble oil in water. We use pop bottles with little holes drilled in the caps; And, of course, warning lables, as soluble oil coolant tastes lousy. LOL

You need to make soluble oil coolant, just make a solution of palmolive in water, and titrate in just enough oil to keep it from sudsing when shaken.

Great tip for your own coolant, there.

It'll come in handy when we're in a fit state to build a lathe using tyhe RepRap.

Brass is good stuff, though hard to come by in blocks - I'm desperate enough to cast my own!

I do have a lot of aluminium, however. Despite the extra letter, every bit as good as aluminum and just as light :)

Anyway, I used that for my last extrusion head, and it works well for continuous extrusion - I guess it's the high conductivity rather than the thermal mass that's important in that application. Do we need a massive but conductive block, a small block with a high heat capacity, or don't we care much?

Vik... you might want to check with these guys...

If they don't have brass in large cross sections in stock I'd bet they'd know where you could get it.

Thanks. Whangarei is a bit of a way away, but I'll be sure to find intermediaries down on the waterfront. Actually, a precision bearing manufacturer is offering me 1/2" bronze stock at about NZ$35 a foot.

I can't wait to see pics of your extruder going - I'd love to include some in the RepRap presentation, if that's OK by you.

I'll be more than happy to share pics of it in operation with you when I get it finished.

That said, the people I bought the welding machine from just emailed me today saying that it's sitting on the loading dock waiting for the courier service to pick it up. Considering that I paid for it last Thursday I'm a little torqued at them. That pushes back the completion date till after Christmas. :-(

As well, although I am supposed to be receiving a 5 kg sample of CAPA 6800 I still haven't received notification that it has been dispatched from the UK yet, which means that it probably won't arrive till sometime in January.

In the meantime I'm learning how to pilot AoI, relearning what I used to know about stepper motors and controllers and thinking about what ought to go into a positioning table.