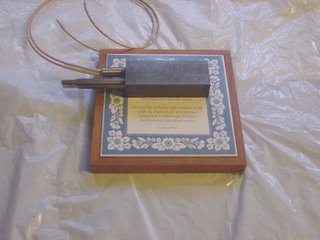 I looked after several small but important jobs on the filament extruder today with the grinder. First was prepping the end of my bar of 1x1-1/2 inch cross-section bar so that I can cut a new guide block for the extruder piston.

More importantly, I ground down the end of the piston as you can see in the photo so that it can be attached to the injector handle of the system. I got it to .001 inch tolerance which is not so bad with a grinding wheel.

Finally, I heat tested the assembly to 220 degrees Celsius to see if expansion was going to cause binding in either the piston or the cartridge heater. Although the piston fits quite tightly in the extruder cylinder there was no heat expansion binding and the cold cartridge heater was readily able to fit into its slot.

There are a few extra bits of assembly to be done but I will be putting those off until my welding rig arrives. After that all that remains is to wire up the heating circuit and we are good to go.

Comments:
I've been eargerly following your progress for about a year now. I am a bit confused though as to how close the machine is to being finished. Could someone clarify for me how close the project is or point me towad where I an find out? Thanks

Depends what you mean by machine, and how finished you like it :)

We have an extruder head that we belieive will squirt polycaprolactone with sufficient precision. This has been tested on a conventional 3D axis. Adrian has done an amazing amount of work on developing the extruder heads, and is currently developing one that will be able to deposit icing, sealant and so forth.

We have a sufficiently accurate linear axis, and I'm waiting on the last few bits to assemble a vertical axis. The real-world operational parameters of that axis will determine the dimensions of a linear stage, which will sit on top of it. This, I should imagine, won't take more than a week to design.

Then there is the software side, which Simon has been working industriously on. Not only has he been working on drivers, but the build environment for them. He has hosted a Wiki (http://reprapdoc.voodoo.co.nz/bin/view/Main/WebHome), and a CVS repository which are essential parts of the project.this is only a few weeks away from first cut as I understand it. Simon can no doubt fill you in on the details.

Higher level software is generally ArtOfIllusion, which we are now using to design the parts. Adrian sorted out how to bypass some of its deficencies, and Nik in particular has been very helpful in developing and tweaking AoI to suit our requirements including support of the STL standard.

We do not yet have an STL to RepRapSpeak converter, but have a rough idea as to how this will be achieved.

The primary objective is to get a machine out there that works, so the curious and enthusiastic can tinker with it as much as anyone else can. That's when something will be "finished".

There are a host of improvements that must be made: A recycler, use of PLA or other bioplastic and all that entails, circuit deposition, more design tools, parts libraries and so forth.

Like Linux, I doubt it'll ever be "finished" to the point where no more tinkering is required. It is specifically designed to be tinkered with!

Thanks for the update. I think this project is fantastic I can't wait to get my hands on a replicated copy to tinker with.