On a whim, I put an M4 die in my lathe chuck, set the lathe on its slowest speed, and fed in one of the 4mm polymorph rods I made for the extrusion experiments described below. I held the free end with a pair of pliers to stop it from rotating. The result was an M4 thread right down the rod: 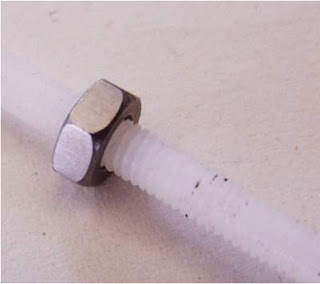 I put a nut on it and used that to push a tube with an i.d. of 4mm against a set of scales. It held to over 100N (then I had to stop pushing...). This gives an interesting way to feed the material into an extruder: thread it, then wind a nut against a stop to force it into a heating chamber. Here's a crude sketch:

On these matters, Steve DeGroof e-mails to say: "Not sure if this would work but have you considered using airbrush nozzles? They typically come in 0.6mm, 0.4mm and 0.2mm sizes. You usually have to order the nozzle, needle and cap as a set but they should still be fairly inexpensive." This seems a neat idea to save people having to machine nozzles.
# posted by Adrian Bowyer @ 5:23 PM

Unexpectedly, the boy's defiant expression melted away, replaced by an unsettling grin. "Nothing to say, ma'am, but may I ask a question?"

The administrator felt a sudden chill and took an unconsciou step backward. "You may."

His name is Adrian :)

The flattened end might limit the length of the feedstock we can use. We could put a flat on the whole thing, I suppose, but a pinch-wheel feed sounds a bit simpler.

If you're planning on making items up to, say, a litre in volume without stopping to reload, you'd need something like 80m of 4mm rod.

I wonder if there's a way to process the Polymorph pellets into a continuous thread that could be fed directly into the head. Something like an auger that feeds the pellets from a hopper into an extruder. Maybe a bit too Rube Goldberg.

Adrian was working on a Polymorph extruder made from ABS at one point. I'll see what happened to it.

Steve's was my original plan... The best system would obviously be one based on the unprocessed pellets. But you don't want to carry a lot of weight around in the deposition head, which means you need a system for recharging. I'm thinking of one based on compressed air - open a valve to drop the thing to atmospheric, charge with 50g (o.w.e.) of pellets, then re-compress. Have the heater at the bottom of the pressure chamber with a valve to control the flow.

Something that my experiments have taught me is that any system that can store elastic energy is very hard to control without a valve as the final component.

But a miniaturised auger extruder would be good if it could be made to control the flow well enough.

I could come up with only 2 ways around an overweight head, neither of which are particularly desirable.

The first involves a stationary extruder that feeds the head via a flexible conduit. This complicates the feeding mechanism in that you now have to control the feed rate a two separate points.

The other way is to use a stationary head and move the piece in all three axes. This would probably result in an overly-complex platform.

Still, I like the concept of dumping bits of plastic in a hopper and getting a finished product out the other end. This would be especially satisfying if the bits of plastic were old milk jugs.

So far I've been working around a stationary head. I'm fond of the concept because it makes it much easier to add new heads to the machine.

I've been thinking about this a bit more. Vik's idea of a pinch-wheel feed is obviously preferable to my screw feed, as it needs no thread cutting. If enough force could be generated (and polymorph is quite low-friction) it's obviously the way to go if you're going to feed cylindrical stock.

And (for Version 1 at least) I think the structure of rods reduces the problem count over an unstructured chip-feed system (though I absolutely agree that that's preferable long-term).

On balance (i.e. anyone can change my mind about this...) I think we should go with a head that uses short rods and feeds them with a pinch-wheel. As Steve quite correctly points out this means a small volume of production per rod. But if the machine had a magazine of rods to one side to which the deposition head returned every 15 minutes to nudge a lever and drop another rod into its pinch wheels, then all you've got to do is put a couple of handfuls of rods into the magazine once a week...

And, as Vik and I have proved, making good rods from polymorph chips is child's play - indeed it's just like making Plasticine sausages...

i like thinking of the rods as "chips". most pellets are just dumped into the hopper in commercial injection molders i've seen. and because they're treated as raw material going into a generic feed system, shape isn't really an issue. however, for a custom system, raw material shape could be integral to the function.

i like the threaded rod, but given this train of thought, i'm now wondering if there are other shapes/feeds; especially if the hope is to use a variety of materials.

We can make the rods quite long if we want to, and a quick experiment in joining 4mm Polymorph rods - and they join readily in the steam from the kettle - shows a radius of curvature of 100mm. So having a length of it dangling into a pinch-wheel mechanism might be practical, particularly if the head is static.

Adrian, did you get the belt pulley file I sent?

An idea I was planning on trying out was to have a 'bladder' made of some high temperature material filled with pre-melted polymorph and then compressing the bladder to extrude the material. I think this set up would also be handy for forcing out air bubbles of the melted polymorph.

Some nice insulation would be required to keep the temperature just right without using too much power, but the nice thing is you should just be able to dump in raw materials in any old shape and it can scale as big as you can build it.

See the brass and PTFE extruder above. PTFE is good up to 250 degrees C or thereabouts, though thick sections are not flexible. I also think (check this, though) that polydimethylsiloxane (a.k.a. bathroom sealant...) goes up to quite high temperatures if you want a high-temp bladder.

So, if one works with rods, where can one buy the rods? I understand that one can easily make the rods. But that assumes that your time has zero value.

Of course, we can assume that an industry will be created that supplies spools of rods to RepRappers.