I had a few moments and made up the threaded drive shaft for the Mk II out of 1/4-24 threaded rod. 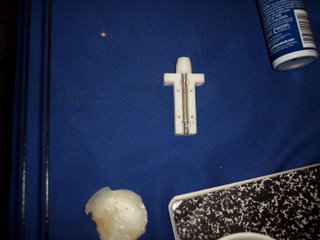 Comments:
Along the lines of more simple and rugged approaches to extrusion, how about this- It occurred to me that in lieu of melting a pot of plastic and having to pump that, we could use a two step process. One step to produce a filament and the second step to remelt and extrude at the 3-axis print head. It may sound more complicated at first but bear with me here. The filament can be produced ahead of time in rolls, even on a separate machine (some day even purchased) or it can be produced as it is consumed- your choice. The bonus comes in where the extrusion print head is small in mass and complexity. The extrusion print head can be like a cross between a hot glue gun and a MIG welder. The filament can be drawn and forced into a close fitting orifice (like a glue gun) by a pair of friction rollers (like a MIG welder feeds wire). The heater would only have a small mass to heat at a time, and the drive rollers and geared motor would only have to weigh a few ounces. The filament can be suspended (fly) above the translating print head as it is being drawn. It would be a requirement though to have fairly decent control of filament diameter here also.
Comments welcome-

Rich: that's pretty much how we're doing it.

Vik's screw drive has one big advantage: it's really hard to get enough friction to do the drive with pinch rollers - I tried that in my Mk I design, and it never really worked. But Vik's screw drive produces a very big force with almost no effort...

What if, instead of rollers, you used a set of (metal) gears that were close enough together so that the teeth would dig/dent the feed stock? Do you think that would have made a difference in your MKI design? or is it more of a torque problem?

If we had enough feedstock to have tens or hundreds of meters of it coiled up on a large drum - as one imagines eventually being the case - then rotating the drum could maybe provide the necessary drive without slippage. You'd have one end of the filament threaded into a hole in the drum or something - and it would have to go into some kind of a guide tube...but there must be a gazillion industrial machines that do this kind of thing successfully.